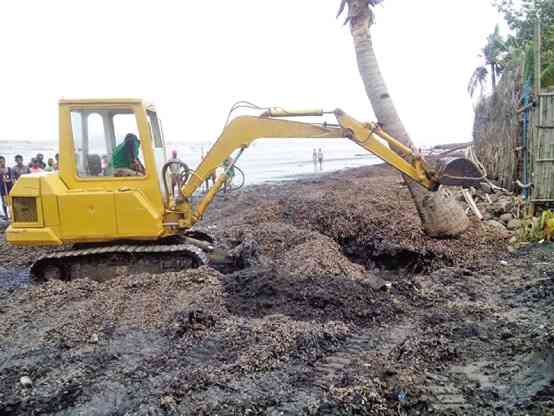 THE TOWN of Valladolid uses a backhoe to retrieve hundreds of kilograms of mussels that were dumped on three coastal villages by waves spawned by Tropical Storm “Egay.” ZEAPHARD CAELIAN/CONTRIBUTOR

BACOLOD CITY—When the waves brought in mussels on Saturday, residents of three coastal villages in Valladolid town, about 31.1 kilometers south of here, thought it was manna from heaven.

But the waves kept on bringing more mussels that after three days, about 30 tons of seashells were spread on a more than 2-km stretch in Barangays Tabao Proper, Central Tabao and Bagumbayan.

The rotting mussels are creating a strong stench that has become a health hazard, said Valladolid Mayor Rommel Yogore.

He said waves spawned by Tropical Storm “Egay” (international name: Linfa) dumped the mussels on the Valladolid shoreline starting on Saturday, creating a mat of mussels on the shoreline that reached 16 inches deep.

“At first, the residents were happy with the mussel bonanza that landed on their shores but there were just too many for them to eat, preserve and sell,” he said.

Yogore said the stench of the dead mussels had become difficult to bear. These also attracted flies, posing danger to residents’ health, he added.

The mayor said they did not know where the violet and brown mussels came from but the big waves just dumped these on their shores.

He said they were using backhoes to dig deep holes to bury the mussels.

The mussels were dumped on the Valladolid seashore by waves from Saturday to Monday, according to Francis Mate, Valladolid disaster risk reduction management officer.

He said they were rushing the cleanup for fear that the rotting mussels could trigger an outbreak of diseases.