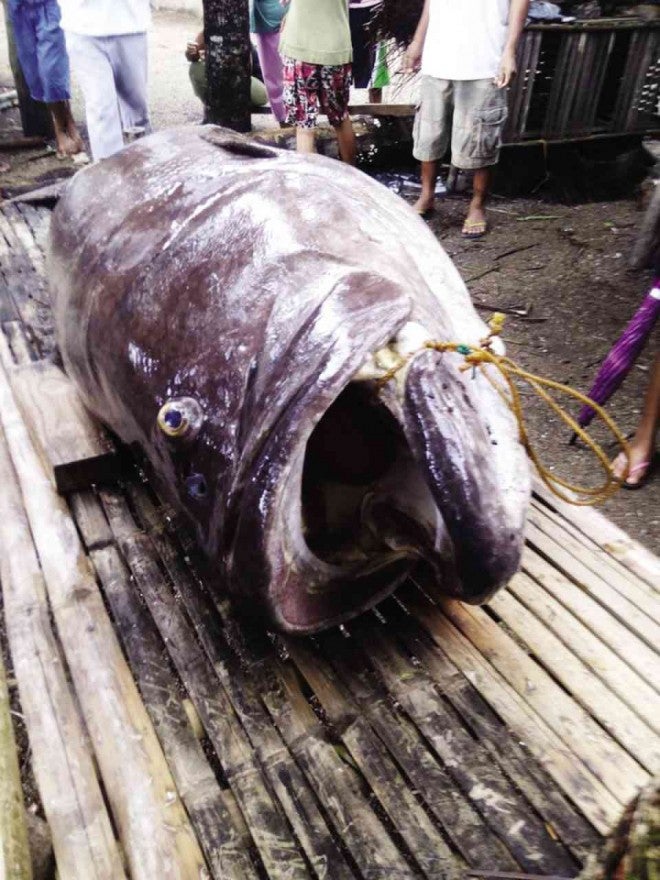 TIBIAO, Antique—A stranded seven-foot, 176-kilogram giant grouper, the largest reef-dwelling fish in the world, was found by a fisherman in the shore of Libertad town in Antique province on Wednesday.

Jesie Cacam, a fisherman from Barangay Taboc, saw the dying fish, locally known as “lapu-lapu” in Filipino, or “pugaro” or “kugtong” in Kinaray-a language, and asked the help of seven fishermen from the village to carry it from the Pandan Bay to shore, where it eventually died.

“So far, that pugaro is the biggest grouper caught in the town of Libertad,” said one of the elders in the fishing village. A person weighing 50 kilos “can fit inside the mouth of the grouper,” said Estaquio Daypuyart, the barangay captain.

The giant grouper (Epinephelus lanceolatus) has a large mouth and a rounded tail. Juveniles have irregular black and yellow markings, while adults are green-grey to grey-brown with faint mottling, with numerous small black spots on the fins.

It is considered Vulnerable by the International Union for Conservation of Nature (IUCN) Red List Status, indicating the need to protect and conserve this species.

Though the giant grouper is the largest bony fish found in coral reefs, there is no confirmed reports of fatal attacks on humans. However, the species is nearly wiped out in heavily fished areas.

“The grouper found in our town indicates that bigger fishes can still thrive well in our municipal waters. However, we are closely monitoring all fishing activities in order to strictly enforce necessary laws,” said Mayor Berting Raymundo, chair of the Libertad, Pandan, Sebaste and Culasi (Lipasecu) Bay-wide Management Council.

Reports said the giant grouper found in Libertad was sliced and its meat sold.