An act of uncommon kindness 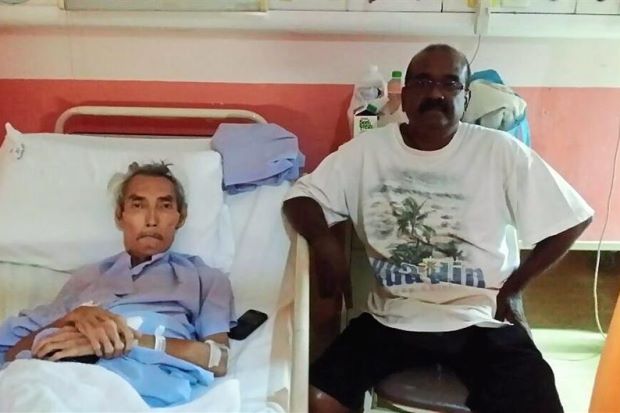 Friends until the end: The last photo taken at the hospital a day before Low (left) died. Rajagopal visited him everyday. The Star Online/Asia News Network

At a time when some refuse to take care of their own parents, one man took care of a stranger of a different race in his own home for 10 years.

Rajagopal recognized the frail old man who used to work for a building contractor doing a project near the bank where he worked.

“I used to see him laying telephone cables near my office, but we only said “hello” to each other and nothing more.

“When I saw him in Jalan Pudu, he told me he had not eaten a good meal for days and was living off cucumbers disposed of in the market.

“He told me that he was retired and lost all his Employees Provident Fund contributions to a conman while trying to buy a house.

“He had no money and the landlord had thrown him out, so he was living on the streets.

“I bought him lunch and brought him home,” he said.

Rajagopal lives with his wife and daughter in a three bedroom apartment in Cheras. He let Low stay in one of the bedrooms.

Rajagopal has seen his own share of hardship. He lost sight in his right eye after an accident in 1997. But Rajagopal remains positive and says life must go on.

“All Low needed was a place to live and food to eat.

“If I do not cook, there is a restaurant nearby where I have arranged for him to eat whenever he wants. I settle the bill on a monthly basis.

“There are also many generous people who know his story and offer to pay for his food and give him money when they see him.

“Every Chinese New Year, there is also one man who will buy new clothes and give Low an ang pow.

“Low gets very happy when people give him money, even if it is just RM10, because to him it is a big amount.

“He uses the money to buy food and occasionally go for a movie, but lately he spends most of his time at home ,” Rajagopal says.

Low’s application for welfare aid was finally approved by the Federal Territory Kuala Lumpur State Social Welfare Department in 2012 and he started receiving RM300 every month.

“However, it was slashed to RM80 in March without notice.

“When I called the Welfare Department to inquire, the officer who declined to be named told me to tell Low to take it or leave it,” Rajagopal said.

When Low fell ill late last month, Rajagopal and a friend rushed him to the hospital.

“The hospital staff were all puzzled seeing an Indian bring in a Chinese man and asked a lot of questions.

“I told them that I was his guardian and they proceeded with the treatment.

“He was diagnosed with dengue and passed away on June 29.

“The hospital refused to release his body to me and I had to contact his sister who lives in Klang to claim it.

“His sister and younger brother arrived and handed his remains to us.

“I was told by his family members that he was rebellious and left home at a very young age.

“He was traced by his sister some years ago to settle the matter of a house that was willed to the siblings.

“The case was still in court and the sister gave him money from time to time.

Rajagopal and his friends arranged for a funeral service and cremated Low the next day.

“I messaged the people who had helped Low to inform them about his passing and some came forward to contribute for the funeral expenses.

“We attracted a lot of attention at the crematorium because it isn’t usual to see four Hindus and a Punjabi cremating a Chinese man, assisted by a Buddhist monk.

“Many people asked me why I did this and I just tell them that he needed a home. But it was easy as he was also going senile.

“I am not rich but I realize that there are many generous people among us. Every time Low needed something, there were always people who would volunteer to chip in,” he said.

While clearing Low’s room, Rajagopal stumbled upon diaries he kept about the sorrows in his life.

“I learnt that he had a hard life. He died in his sleep and I take it as a good death. But I still think he was gone too soon.

“However, I am glad that I did the best I could for the last 10 years of his life,” he said.