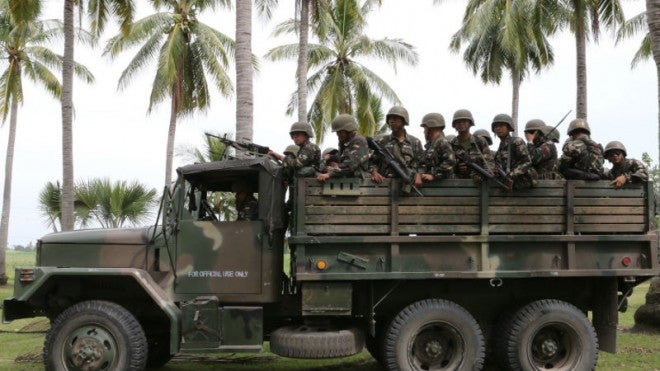 In this Feb. 25, 2015, photo, soldiers on board a military truck are seen in Pikit, North Cotabato, on an “all-out offensive operation” against the Bangsamoro Islamic Freedom Fighters. The Department of National Defense (DND) on Tuesday said there was nothing irregular in its decision to shelve the planned acquisition of the P6.5-billion missile system from Israel for the Philippine Army in view of the country’s internal security threats. PHOTO BY JEOFFREY MAITEM/INQUIRER MINDANAO

The Department of National Defense (DND) on Tuesday said there was nothing irregular in its decision to shelve the planned acquisition of the P6.5-billion missile system from Israel for the Philippine Army in view of the country’s internal security threats.

Arsenio Andolong, director of the DND’s public affairs service, said the Shore-Based Missile System (SBMS) under the modernization program of the Armed Forces of the Philippines was just in the planning stage.

“The SBMS project is merely a proposal at this time, and as such, there is no ‘realignment’ but rather a reprioritization of the said project in favor of the urgent need of our PA (Philippine Army) troops for individual force protection equipment,” Andolong said.

He said the “reprioritization” was a collective decision by senior defense leaders, which was submitted to President Aquino after going through the required processes in the Defense System of Management.

The Inquirer reported on Tuesday that Defense Secretary Voltaire Gazmin, AFP Chief of Staff Gen. Gregorio Pio Catapang Jr. and Army chief Lt. Gen. Hernando Iriberri had scuttled the contract for the Israeli weapons system, which was primarily for territorial defense. The deal with Israel was negotiated in December 2014.

The report also said the last-minute change was made allegedly to earn a windfall from commissions from private manufacturers unlike the contract with Israel, which is government-to-government and therefore with no commissions.

“We reiterate that Defense Secretary Voltaire Gazmin will never be a party to nor condone graft and corruption in the AFP Modernization Program as insinuated in the report,” Andolong said.

In the House of Representatives, three lawmakers criticized defense and military officials for their misplaced priorities and undue haste in canceling the purchase of antiaircraft missiles from Israel in favor of purchasing battlefield gear such as helmets, body armor and night vision goggles.

Antipolo Rep. Romeo Acop said it was unusual for the military to prioritize internal threats when its main responsibility was to protect the country from foreign incursions, like China’s buildup in disputed waters.

“It’s also true that there are no broker commissions in government-to-government, such as the missile contract unlike the purchase of battlefield gear. But I’m not sure if this was a factor in the sudden change of plans,” Acop said in a phone interview.

Acedillo said purchases under the AFP Modernization Program involved billions of pesos and it took years of planning sessions before any item would be placed on the shopping list.

He said the DND and AFP should explain why they dropped the missile purchase because their justification—increased threats from terrorists—was too flimsy to justify a drastic change in acquisition.

ACT Teachers Rep. Antonio Tinio said Congress should look into the decision-making process of Gazmin, Catapang and Iriberri who took only a few months to abandon the SBMS that was negotiated for two years between Israel and the Philippines.

“There’s definitely something fishy going on here, and Congress should investigate. Just recently, the Aquino administration declared with much fanfare that it considered external threats to the country more important than internal security concerns, such as the communist and Moro insurgencies. Hence, it made the acquisition of external defense capabilities a priority of the AFP Modernization Program,” Tinio said.

“It was only moved to the second horizon (of the AFP Modernization Program). It was not scrapped,” explained Detoyato.

Iriberi said the decision was for the best interest of the 85,000-strong command and its soldiers.

The decision to set aside the missile defense system, he said, involved national security concerns like the Army’s capability gaps.

“We cannot discuss matters pertaining to capability gaps of the Philippine Army as these are classified information involving national security,” Iriberri said in a text message to defense reporters.

“We want to assure our people that whatever actions the PA had undertaken on the matter are all for the best interest of your Army and for the welfare of our soldiers,” he added.

It was Iriberri who supposedly recommended the change which was conveyed by Catapang to Gazmin and approved in principle by Aquino.

Top military officials, who asked not to be identified, said Iriberri’s move was supported by the generals, citing the pressing need for force protection equipment on the ground.

“Our troops are falling victims to land mine attacks, the use of IEDs (improvised explosive devices) is now prevalent. We need to protect our soldiers from these dastardly acts by enemies of the state,” said an Army battalion commander.

“The use of IEDs is now prevalent in the field. All armed threat groups—the NPA (New People’s Army), ASG (Abu Sayyaf group) and even the BIFF (Bangsamoro Islamic Freedom Fighters) have access to this type of explosives,” he added.

Another officer said that even if the Army pushed through with the missile defense system, it was capable at this time to operate it. In addition, the missile system would not ease the tension with China in the disputed waters in the West Philippine Sea.

No war with China

“We will not really go to war with China,” another official said.

He said China would never stop its aggressive reclamation in the South China Sea should the Philippines and neighboring countries acquire similar missile weapons system.

Iriberri brushed aside allegations of “kickbacks” from the new projects.

“On the allegation of ‘commission,’ those are pure lies,” Iriberri said. “As I said, whatever actions the PA had undertaken on the matter are all for the best interest of your Army and for the welfare of our soldiers.”

The report was perceived by other senior military officers as a demolition job against Iriberri who, according to sources, is being groomed to replace Catapang who will leave the service when he reaches the mandatory retirement age of 56 on July 10.