Who will be the next AFP chief? 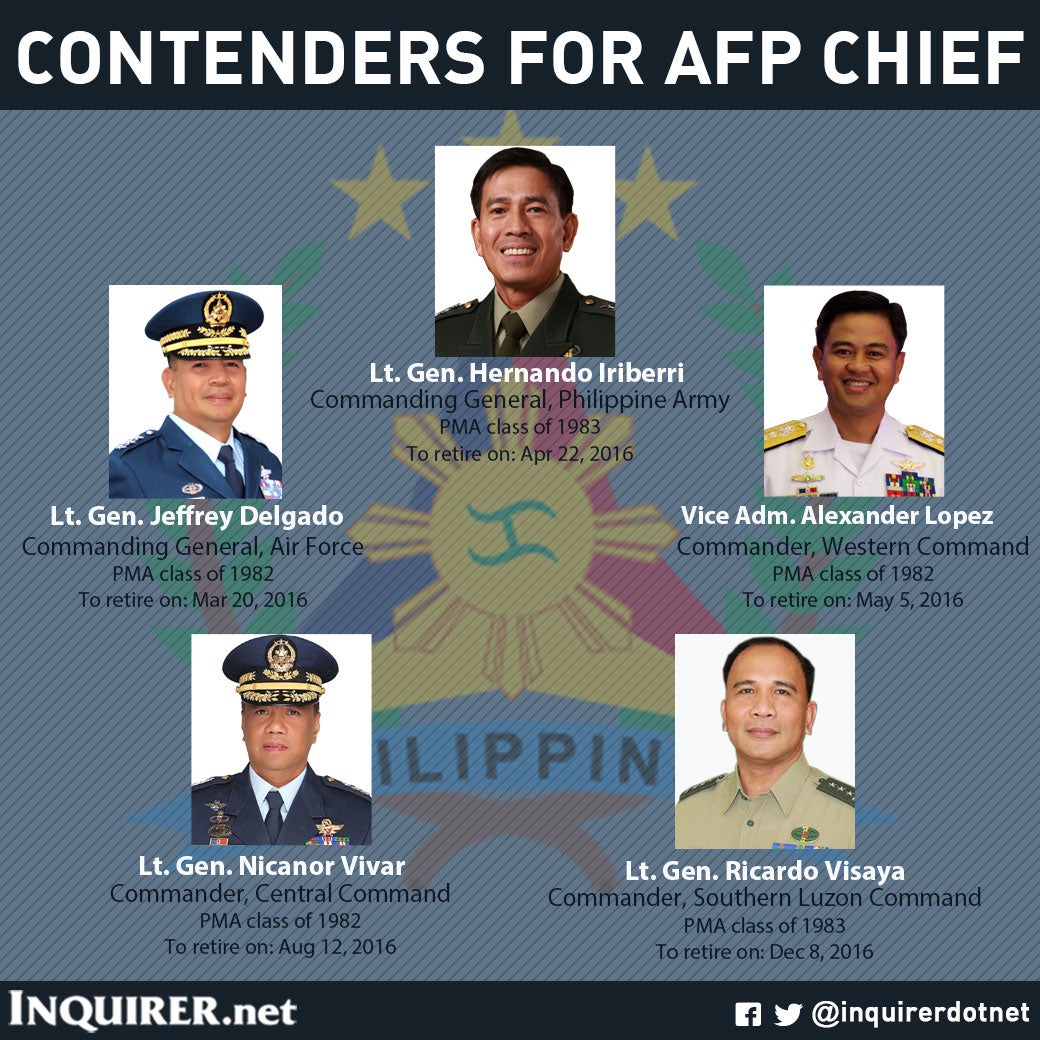 The 125,000-strong Armed Forces of the Philippines (AFP) will have a new commander on Friday as General Gregorio Pio Catapang Jr. retires from the service.

They were all in Manila last week for Catapang’s last command conference as AFP chief.

AFP public affairs chief Lieutenant Colonel Harold Cabunoc said Defense Secretary Voltaire Gazmin had hinted that a replacement might have already been picked but he still could not name the next AFP chief.

Gazmin, however, said that the next AFP chief “would also be professional, capable, and would continue the reforms in the AFP,” Cabunoc told reporters last Friday.

The contenders are holding key positions in the armed forces, and are members from either Philippine Military Academy Class of 1982 or 1983.

Three of the five contenders are scheduled to retire before the May 2016 elections.

Talk circulating at the AFP headquarters in Camp Aguinaldo put Iriberri as the leading contender for the top post. He beat more senior officers when he assumed his current position in February last year.

Iriberri, a member of the PMA Class of 1983, is also known for his close ties with Gazmin. He was once a senior military assistant at the Defense Department.

He was also Gazmin’s spokesman when the latter was the Army chief in 2000.

Iriberri also served as the commander of the Army’s 7th Infantry Division, the 503rd Brigade in Cordillera and Chief of the United Command Staff of the Southern Luzon Command.

An experienced pilot, he flew attack helicopters such as MG520s and T28 Trojans, used in close air support operations.

He was also once part of the Presidential Security Group during the time of President Corazon Aquino and was also said to be a close-in security aide of then presidential daughter Kris.

Lopez, of the Western Command (Wescom), holds jurisdiction of the Philippine claims in the West Philippine Sea (South China Sea).

He once served as commander of Joint Task Force Malampaya, a gas field that supplies electricity to nearly half of Luzon.

He was named Wescom chief in August 2014 after his stint as deputy chief of staff for Education and Training (J8).

Lopez, a member of PMA Class of 1982, was also once the commander of the Fleet Marine Ready Force.

Vivar, a member of PMA Class of 1982, previously served as commander of the Air Force’s 3rd Air Division based in Zamboanga City before he was named chief of the Central Command in August last year.

Visaya is also believed as a strong contender for the AFP leadership.

Also a member of the PMA Class of 1983, he heads the Southern Luzon Command (Solcom) and was recently promoted to a three-star rank.

He headed the Army’s 4th Infantry Division prior to leading Solcom and was also once a commander of the 104th and 901st Brigade.