CAAP: Chopper had no flight plan

Filing of flight plan would have alerted agency and given it time to stop the flight due to bad weather
By: Jeannette I. Andrade, Maricar Cinco, Marrah Erika Rabe - @inquirerdotnet
Inquirer Southern Luzon, Philippine Daily Inquirer / 03:25 AM July 07, 2015 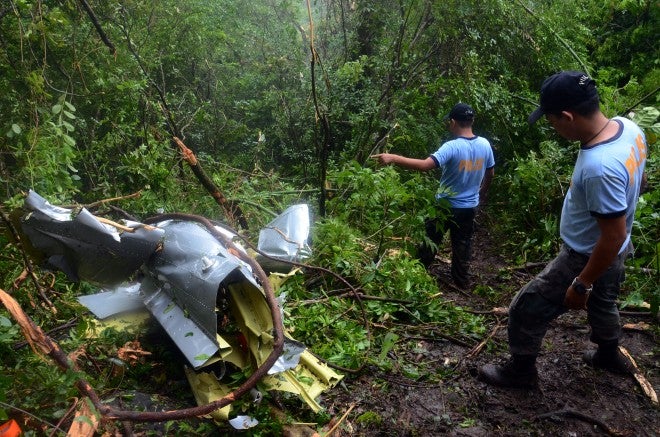 The private helicopter that carried billionaire and hotel owner Archimedes “Archie” King did not advise aviation authorities about its return flight on Sunday, hours before the aircraft went down near Mount Maculot in Batangas province in the midst of bad weather.

Eric Apolonio, spokesman of the Civil Aviation Authority of the Philippines (CAAP), on Monday said it did not receive a flight plan from the aircraft, an Augusta 109E with Registry No. RP-C2726, for its return trip to Manila.

A flight plan, which provides aviation authorities of the flight details, would have allowed the CAAP to monitor the helicopter and advise its pilot of the weather disturbances while it was on flight, Apolonio said.

The helicopter, flown by pilot Felicisimo Esteban Taborlupa Jr., crashed at the height of heavy rains and a thick fog in a forested area in Barangay (village) Pinagkaisahan in Cuenca town around 12:45 p.m. on Sunday.

King later died of severe wounds and fractures at a hospital in Cuenca, while the rest of the passengers, seated at the back, survived.

According to CAAP records, the aircraft left Ninoy Aquino International Airport (Naia) around 10:17 a.m. on Saturday for Puerto Galera in Oriental Mindoro province.

It left Puerto Galera, a known beach town, the next day past 10 a.m. via the “normal route” back to Manila.

A source said one of the survivors was still wearing a swimming suit when brought to the hospital in Cuenca.

“The travel time from Puerto Galera to Naia is around 45 minutes only under normal conditions,” Apolonio said.

He also said the CAAP, as early as 10 a.m. on Sunday, had issued an advisory suspending visual flight rules. This meant that small aircraft, such as that of King’s, were no longer allowed to fly due to the poor visibility resulting from the bad weather.

“If they had submitted a flight plan, the CAAP would have advised the pilot to abort the flight,” Apolonio said.

A team from the CAAP Aircraft Accident Investigation and Inquiry Board (AAIIB) on Monday went to the crash site, a 40-minute uphill climb from the town proper, to commence its investigation.

AAIIB chief engineer Francisco Nahera Jr. said his team was planning to tear open the chopper’s engine to determine whether the aircraft had engine trouble.

“We are considering all factors—the weather and the aircraft itself (in the investigation),” Apolonio said.

As of Monday afternoon, the wreckage of the chopper had not yet been pulled out of the site.

Nahera said the helicopter, as it was about to crash, hit a tree before breaking its tail and rotor blades. There were no explosions or fire that followed the crash.

Rodante Joya, CAAP deputy director general for operations, said previous flight records of the pilot would have to be checked and verified, and investigators would have to sift through the debris of the crash to determine if the helicopter had malfunctioned or was 100 percent in working condition.

“Basically, the weather remains the principal cause. We have to consider the environment there,” Joya said, pointing out that the helicopter might have encountered zero visibility because of the thick rain clouds over Batangas.

Lipa City has an elevation of 1,200 feet similar to Tagaytay and is prone to occurrences of fog and clouds that make visibility impossible.

“We can only speculate that the pilot may have tried to look for a way through the clouds,” Joya told the Inquirer.

He pointed out that there was no indication that the helicopter directly crashed into Mt. Maculot, which would have resulted in more deaths.

“It is possible that the helicopter flew too low and could have grazed trees or a landform,” Joya said.

He said it was not easy to maneuver a helicopter when terrain suddenly loomed before a pilot from zero visibility.

When the helicopter left Puerto Galera the skies were clear, Joya noted.

The Pinagkaisahan village chief, Celestino Lunar, said barangay (village) folk even saw the helicopter as it flew past his house, about a kilometer away from them, before it crashed.

“My wife and I were having lunch when we saw this helicopter flying very low,” he said. He said he suddenly lost sight of the aircraft in the thick fog before he heard a very loud thump.

“It sounded like something big hit a tree. We knew it was that helicopter.”

Lunar and other residents near the crash site were the first to respond, helping the survivors walk down the mountain to a rescue team that waited for them.

“When I arrived, I saw him (Taborlupa) already outside the helicopter. He was already gone,” Lunar said.

He said the pilot’s seat looked like “it was ejected out of the helicopter” by the impact. King was still in his seat pinned inside the helicopter.

Lunar said villagers pulled the still conscious King out of the chopper as he limped with his badly injured left leg. The businessman could no longer speak and only moaned, he said.

“He looked strong though. When his shirt got pulled up, as we tried to carry him, he was able to pull it down himself with his arm,” Lunar said.

“I thought he would have survived,” he added.