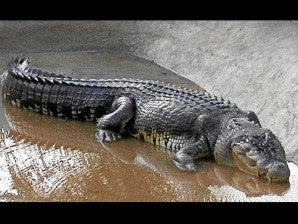 KORONADAL CITY, South Cotabato—“Lolong,” the one-ton captured saltwater crocodile, had a meal for the first time on Monday, after refusing to eat for about a month since his capture in the Agusan Marsh.

Welinda Asis-Elorde, media relations coordinator of Bunawan town, on Tuesday said Lolong ate the 7 kilograms of raw pork that a worker at the wildlife park gave him at around 10 p.m. on Monday.

Asis-Elorde said the reptile would be served a meal again Tuesday night.

“Maybe he is not satisfied. We usually feed pork and dressed chicken alternately,” she said.

Dr. Rex Linao, executive director of the Agusan Development Foundation, said Lolong was a victim of illegal fishing in the Agusan Marsh, with fishermen encroaching on the reptiles’ feeding areas.

Read Next
Arturo Cacdac assumes No. 3 post in PNP
EDITORS' PICK
After Olympic win, PAF promotes Hidilyn Diaz to staff sergeant
Connect to PH’s fastest network with new Signature Plan Lite at only P599 per month
Trillanes: No Magdalo support if Robredo gives way to Lacson
Nesthy Petecio assured of Olympics bronze, ousts Colombian foe
Tips for a cheerful life
Harnessing technology for quality education
MOST READ
Philippines to bring home multiple Olympic medals for first time since 1932
Isko for 2022? Manila mayor takes a swipe at Duterte in live broadcast
Lacson bares talks with Robredo ahead of 2022 polls
Why is Taiwan not called Taiwan at the Olympics?
Don't miss out on the latest news and information.