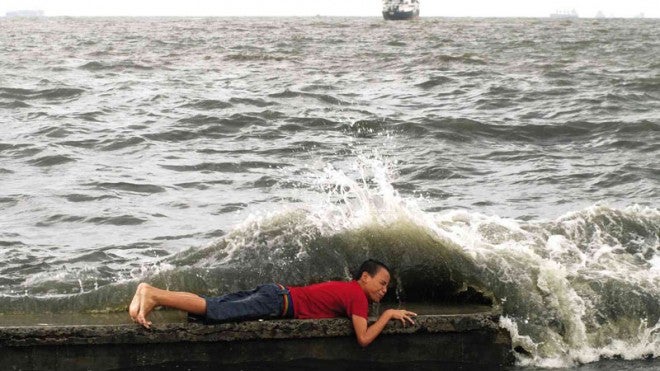 Strong winds and huge waves destroyed 76 houses and damaged 31 others in Cebu, Negros Occidental and Antique provinces as Egay, which has a 400-km-diameter cloud cover, whipped up the southwest monsoon in the Visayas.

The wind also felled trees, blew away billboards and damaged electric lines that triggered power outages in Iloilo City and the province of Iloilo.

Because of bad weather, 14 Cebu Pacific and Philippine Airlines Express flights were canceled as of 1 p.m., Sunday.

Egay made landfall in Palanan, Isabela, around 10 p.m. on Saturday with maximum winds of 95 kilometers per hour and gusts of up to 120 kph.

The storm moved slowly at 9 kph northwestward as it cut across Cagayan, Apayao and Ilocos Norte provinces where it exited the Luzon landmass by Sunday afternoon.

Egay is expected to exit the Philippine area of responsibility (PAR) by Wednesday afternoon, during which a storm with international name “Chon Ham” is expected to enter the PAR.

Chon Ham, locally named “Falcon,” is not expected to hit land but it may pass close to the PAR boundary, according to government meteorologist Glady Salumbides.

Even after Egay’s exit from Luzon, heavy rains will continue over northern Luzon since the storm has enhanced the southwest monsoon, Salumbides said.

She said rains would continue to be felt over the rest of Luzon, including Metro Manila, as well as Western Visayas for the next few days.

Volunteers and work crew deployed by the Department of Public Works and Highways started clearing these roads of debris.

Three families in Benguet’s capital, La Trinidad, were evacuated from Barangay (village) Puguis, the site of a landslide in 2009, which killed 77 people.

No injuries were reported from Egay’s incursion, except for a carabao that drowned and was recovered in San Mariano town in Isabela.

In La Union, 11 coastal coastal towns and San Fernando City were underwater due to the overflow of major river basins, said Melchito Castro, Ilocos director of the Office of Civil Defense (OCD).

“The major river basins swelled because of the rains. In San Fernando City, the major roads are no longer passable and the houses under water,” Castro said on Sunday.

The province has been suffering from power outage since Sunday morning.

Patients at Ilocos Training and Regional Medical Center in San Fernando City have been evacuated due to rising floodwaters, Castro said.

Several towns in Pangasinan lost power when a 69-kilovolt line of National Grid Corp. of the Philippines tripped due to the rains. Affected towns were Labrador, Sual, Mabini, Burgos, Dasol, Infanta, Agno, Bani, Anda and Bolinao and Alaminos City.

But even with the heavy rains, the water levels in major dams in Luzon, which are already below their normal operating levels, continued to go down on Saturday.

Angat Dam in Bulacan province decreased further by 0.18 meters to 169.14 meters above sea level. With irrigation supply already restricted, even the supply for Metro Manila’s domestic water needs will be limited once the dam breaches the 160-m mark.

Magat Dam in Isabela, one of Luzon’s major power and irrigation sources, also went down further by 0.38 m to 176.68 masl. Its minimum operational level to generate power is 160 masl.

The level in Ambuklao Dam in Benguet, San Roque Dam in Pangasinan, Pantabangan Dam in Nueva Ecija province and Caliraya Dam in Laguna province also went down. Only La Mesa Dam in Quezon City and Binga Dam in Benguet saw their levels slightly go up.

The city’s disaster office encouraged residents in other coastal villages to evacuate to safe ground. A truck of the local government was on standby to pick them up and transfer them to schools serving as evacuation centers.

The City Social Welfare and Development Office distributed food packs to the evacuees.

Metro Cebu experienced moderate to heavy rainfall. Small vessels with trips from Cebu to other provinces like Bohol, Leyte, Samar and other areas were not allowed to sail by the Coast Guard since Thursday due to strong waves.

Barges and roll-on, roll-off cargo and passenger vessels were, however, allowed to operate. But the Coast Guard strictly implemented the no-overloading policy. Hundreds of passengers were stranded in Cebu City ports as well as in the Mandaue City Wharf.

Two tornadoes and flooding hit Negros Occidental with no casualties reported, according to reports reaching the Office of Civil Defense in Western Visayas.

A tornado destroyed seven houses and damaged 20 others in Barangay Mambulac in Silay City in Negros Occidental. Twenty-seven families, or 108 persons, were affected.

Two other houses were destroyed and seven others damaged by a tornado in Barangay Bagroy in Bago City with nine families, or 35 persons, affected.

In Valladolid town in Negros Occidental, five families or 20 persons were evacuated due to flooding in Barangay Tabao Proper, according to the OCD report.

While Iloilo was not under any storm signal, strong winds felled trees and damaged power lines triggering brownouts since Friday, according to Panay Electric Co., Iloilo City’s power distributor.

The Coast Guard regulated boat trips between Iloilo and Guimaras Island, limiting the number of ferry passengers to 75 percent of boat capacity. Trips were up to 6 p.m. or before dusk.

‘Egay’ warning signals 1 and 2 still up over 13 provinces

‘Egay’ slightly weakens as it heads to Batanes

Read Next
Binay snubs anew Senate body’s corruption probe
EDITORS' PICK
Metro Manila’s COVID-19 cases on downward trend, but surge not over — OCTA
House energy committee chair Arroyo bats for cheap electricity
Unleash the photographer in you this World Photography Day with vivo smartphones
Look Through: The fate of impounded stray dogs
Palace warns sugar hoarders after raid on Pampanga warehouse
What to watch out for when selecting a video surveillance solution
MOST READ
LOOK: Miel Pangilinan dazzles in glittery pre-debut shoot
DOJ indicts bank officer in $2.1 billion Wirecard fiasco
No De Lima visit, but US lawmakers got to see Marcos
August 19 a special non-working holiday in Quezon City
Don't miss out on the latest news and information.