DAVAO CITY—Mayor Rodrigo Duterte has asked the Criminal Investigation and Detection Group (CIDG) to take over the investigation of the reported entry of “fake” rice in the city, following reports that “suspicious” rice are being peddled as “local rice” from the rice-producing towns of Bansalan in Davao del Sur and Banaybanay in Davao Oriental.

“Whether that is local or imported, you will need to take another step of investigation, I have to turn this over to the CIDG because this is not an ordinary police work anymore,” the mayor said.

“This is not just a small operation or distribution because it has reached so many places,” Duterte said, as samples of suspicious rice were turned over to the National Food Authority (NFA) in Taguig for laboratory analysis.

“I am ordering (Davao City Police Director Col. Vicente) Danao to turn over all available evidence, if at all, to CIDG for CIDG to take over the investigation,” he said as he asked traders not to dispose their newest stocks yet to allow authorities to examine them.

But until results of the clinical analysis come out, he said he would refrain from saying anything to avoid creating panic.

“I don’t want to unnecessarily drag people and establishments into an issue that is not clear to us,” he said during his Sunday television show “Gikan sa masa, para sa masa.”

He reiterated his warnings to traders, saying they are responsible for any fake rice found in their possession. 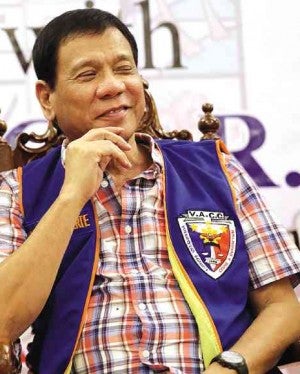 In Las Piñas, Rep. Mark Villar said top customs officials in Mindanao should be replaced for failing to check the entry of fake rice in the ports under their watch.

“It’s difficult to implement a complete overhaul of the Bureau of Customs (BOC) but I’m sure we can remove the bad apples,” said Villar in a radio interview.

Villar said that in the case of the fake rice imports that were believed to have slipped through ports in Mindanao, “those in charge of BOC Mindanao should be sanctioned or penalized.”

At the least, Villar said the BOC should reassign the BOC management team in Mindanao so that a better manager would be taking the lead. “Any BOC official who cannot solve the smuggling problem in his area should be replaced,” said Villar.

Villar said that during his recent visit to Mindanao, he received a number of complaints that fake rice have found their way in public markets in the region and that the “problem is getting bigger.” He said the complaints have come from rice dealers who noted that buyers have been lured into buying fake rice because of the lower prices.

He said he would call for an investigation in the House of Representatives with the resumption of session later this month.

The Senate committee on agriculture and food will try to find out the extent of synthetic rice in the country’s market and its danger to public health when it conducts its hearing on July 13, its chair Sen. Cynthia Villar said yesterday.

Villar told Radyo Inquirer that her committee would investigate reports that these synthetic rice, said to be made up of potatoes, sweet potatoes and plastic shaped into grains, and reportedly manufactured in China, have reached Philippine shores, particularly Davao City.

“What is the real score of fake rice (here) … and is there rice smuggling now so that agencies like the Department of Justice could act and file immediately cases,” she said of the purpose of the hearing.

Also invited was the Bureau of Food and Drugs as this was the agency that has “enough resources to see if there is something wrong with this fake rice,” she said.

The senator added she also invited the Grains Retailers Association and other stakeholders in the rice industry as they would be affected by the presence of synthetic rice in the country.

“We need to clarify the situation and inform the public about it. It’s important to see the danger on food safety of this rice,” she also said. Germelina Lacorte, Inquirer Mindanao; Gil Cabacungan and Christine O. Avendaño in Manila