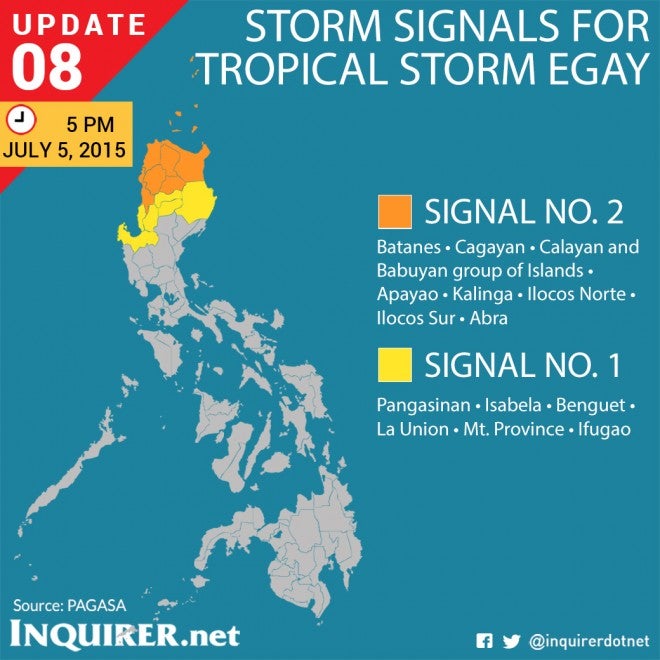 Eleven coastal towns and San Fernando City in La Union are under water due to the overflowing of major river basins following heavy rains from tropical storm “Egay.”

The Office of Civil Defense in the Ilocos region said La Union has been pummelled by strong winds and heavy rains from “Egay,” causing rivers to overflow.

“The major river basis swelled because of the rains. In San Fernando City, the major roads are no longer passable and the houses under water,” Castro said on Sunday.

The province has been suffering from power outage since Sunday morning.

The official noted that only La Union was under water while its neighbors in the Ilocos Region did not suffer any major flooding yet.

“The other provinces had light rains.  Their provincial disaster risk reduction and management councils are on standby to help La Union since they are not as affected,” Castro said.

The official added that some farmlands were completely under water because of the floods as well.

Authorities have yet to determine the cost of the damage from the tropical storm as well as the number of the displaced residents.

Rescue efforts are ongoing to save those in flooded areas as no reports of wounded, dead or missing victims have come in yet.

Meanwhile, the OCD in the Cagayan Valley reported no flooding.

OCD regional director Norma Talosig said there were no reports of major damage to the region as the rain was seen as a welcome respite from the heat.

There were also no reports of preemptive evacuation carried out even though the tropical storm brought moderate to heavy rains to the region.