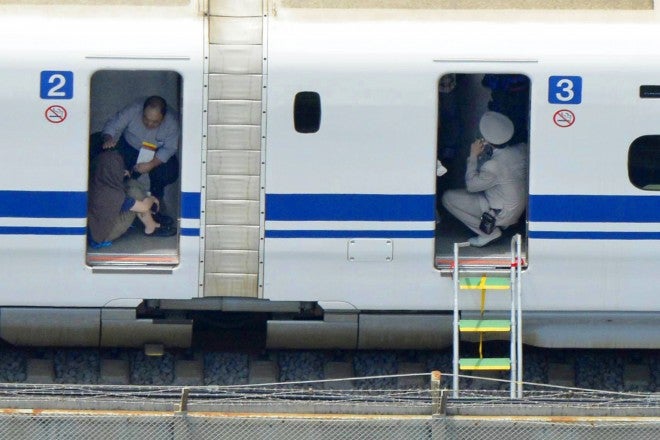 In this June 30 photo, a passenger, left, crouches inside a train car of a bullet train which made an emergency stop after a man set himself on fire, in Odawara, west of Tokyo. AP

TOKYO—A fatal fire on Japan’s bullet train, started by a man who self-immolated this week, has revealed blind spots in a system renowned for its speed, punctuality and safety record.

Riding the Shinkansen feels like being in an airplane: At 300 kilometers per hour, it goes so fast in and out of tunnels that it must be airtight. Windows cannot be opened, and doors open only when the train fully stops, which takes several minutes.

Yet, in a country with strict gun control and low crime rate, security is lax—no identification or baggage checks required.

On Tuesday, Haruo Hayashizaki, a 71-year-old retiree, poured a flammable liquid over himself and lit it while riding a bullet train heading to Osaka from Tokyo. He died on the spot, and smoke filled the coach, choking a female passenger to death.

It was the first fire in the train’s 50-year history. Experts say it was a wake-up call to something more disastrous, potentially a terrorist attack, and it’s time to step up risk management ahead of the G-7 summit in Japan next year and the 2020 Tokyo Olympics.

“The incident took advantage of the blind spots on the Shinkansen,” said Seiji Abe, an expert on transportation safety at Kansai University in Osaka. “Fire caused by malicious intentions was not anticipated, and provisions to keep out hazardous materials were not in place.”

So far, authorities haven’t found any mishandling by the train operator, but the initial investigation and witness accounts have raised questions, including how quickly crew members grasped the situation and whether there should be a better way to clear smoke from the hermetically sealed cars.

A passenger pushed an emergency button, but unlike some newer models, this train was not equipped with an emergency intercom, said Tomoyuki Sano, a spokesperson for Central Japan Railway Co., which operates the Tokyo-Osaka segment of the bullet train.

That meant that crew members knew something had happened in the area where the button was pressed, but were most likely unaware it was a fire until they arrived at the scene.

In a standard emergency procedure, the overhead electric power was cut off for a 20-kilometer (12-mile) stretch to keep the tracks clear for police and rescue workers, also shutting off the train’s ventilation system.

Satoru Sone, an expert on railway safety at Kogakuin University in Tokyo, said that the power should never be turned off, because ventilation is crucial to getting smoke out. He also said an emergency button with an intercom should be installed.

“In Japan, everyone is so complacent about safety while on a train, unlike overseas,” he said, noting that trains elsewhere have been targeted by terrorists and are often less reliable, so smoke resulting from mechanical troubles is not uncommon.

While Japan strives to keep its bullet trains in perfect condition, reducing the risk of fire, arson on the train was little anticipated.

A 1964 law on violations related to bullet train safety doesn’t mention arson, and even today, inflammable ceilings and fire-retardant seats on the train are mainly intended to prevent fire caused by glitches, experts say.

“The system is based on the view of human nature as fundamentally good, which I think is universal,” Abe said. “Unfortunately, in every society there are some people who do evil, and it is extremely important to take precautions to stop these people.”

Police haven’t determined the motive, though Japanese media quoted neighbors as saying Hayashizaki had repeatedly complained that his pension was barely enough to live on.

Transport officials met with bullet train operators after the fire to seek ways to tighten security without affecting the efficiency of the trains.

Experts say airport-level luggage checks are impractical for the high-speed line, which operates trains every few minutes during busy hours. Instead, they say increased police patrols and random baggage checks could be more effective.

Baggage checks for high-speed train passengers are also not required in Germany, France, Taiwan and South Korea. The Eurostar connecting Britain to Brussels and Paris requires a passport and luggage checks, and China has X-ray checks on subways.

The Tokyo-Osaka leg, the most popular segment with 420,000 passengers every day, is part of a bullet train network spanning most of Japan. The 16-car trains cover the 553 kilometers (343 miles) in 2 hours and 33 minutes.

“All these years we were worried but haven’t been able to find effective precautionary measures,” Sone said. “Now that the accident happened, it’s time to take action.”