Sereno: It’s not helpful to comment on Jardeleza attack

Chief Justice Maria Lourdes Sereno on Thursday declined to comment on public statements that a colleague in the Supreme Court recently made against her and Associate Justice Antonio Carpio, saying it will not do the country any good.

“If it is not helpful to the country for me to make any comment, then I will not. And it is not,” said Sereno.

She spoke no further yesterday when asked what she thought of Associate Justice Francis Jardeleza’s speech before the University of the Philippines’ law graduation on Monday, where the most recent addition to the 15-member Supreme Court blasted the opposition that Sereno and Carpio had posed against his nomination to the tribunal last year.

Talking about the August episode, Jardeleza slammed the two magistrates for “vicious untruths” they had supposedly hurled against him in accusing him of disloyalty during the Judicial and Bar Council’s deliberations on Supreme Court nominees. 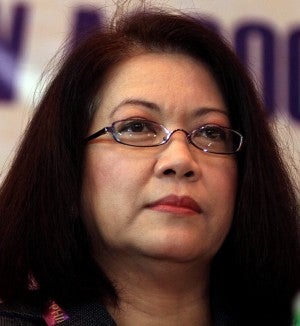 At the time, Sereno and Carpio questioned Jardeleza’s integrity for his legal strategy as Solicitor General, and hence the Philippines’ chief counsel, in the country’s West Philippine Sea arbitration case against China before an ad hoc United Nations tribunal.

The objection was known to have been rooted in Jardeleza’s supposed deletion of paragraphs involving Taiwan-controlled Itu Aba, the largest land feature in the disputed Spratly Islands. The paragraphs were restored on the intervention of Justice Secretary Leila de Lima, according to earlier reports.

Jardeleza still did not address such allegations in his speech on account of government’s confidentiality and secrecy rules in sensitive cases, but he called the accusations “vicious untruths.”

He said the episode had hurt the reputation he had spent “a whole lifetime building.” The magistrate also recalled how it had brought him “close to professional death.”

Despite the opposition, Jardeleza was appointed to the high court on President Aquino’s prerogative on Aug. 20 last year.

Jardeleza and Sereno were once colleagues at the UP Law faculty.