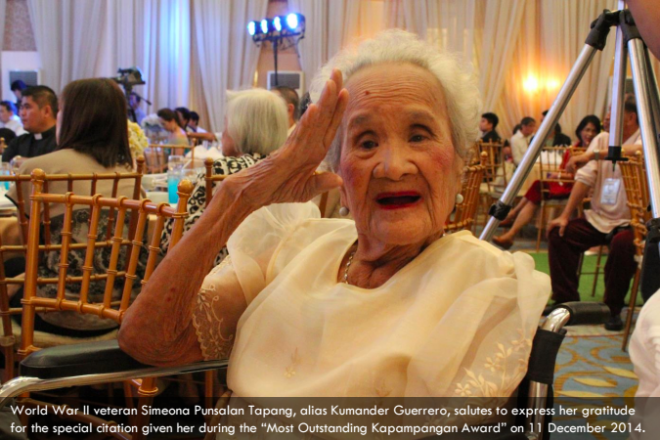 THE last commander of the Hukbo ng Bayan Laban Sa Hapon (Hukbalahap), Simeona Punsalan-Tapang, died on June 30. She was 92.

Tapang was known as Kumander Guerrero when she was with Hukbalahap, a guerrilla group that was popular in Central and Southern Luzon during the World War II.

Carolina said she was once described by the Huk’s Supremo (chief) Luis Taruc as “big-bodied woman with a man’s strength, fond of wearing a man’s clothes, adept at handling an automatic rifle, and would command on the firing line.”

“It has been an honor to have served her. Lola Mameng’s life had exemplified not only love for country in her wartime military service against the Japanese but also her able leadership in their organization, a testament that women rise to the occasion of defending our country,” Carolina said.

Kumander Guerrero participated in the successful Battle of Mandili in Candaba, Pampanga against the Japanese in 1944. She also headed several encounters against enemy forces in Arayat, Pampanga.

In 2014, she was given a special citation during the Most Outstanding Kapampangan Awards (MOKA) night by the Provincial Government of Pampanga, for her contribution in attaining freedom for the country amid great risk to her life and family.

Apung Mameng, as she is fondly called in their community, is survived by her only daughter, Ligaya, several grandchildren and great grandchildren. Her remains lie in state in Barangay San Miguel, San Simon, Pampanga. Interment will be on July 7, Carolina said.