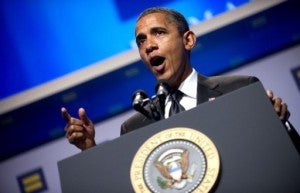 WASHINGTON – The US Supreme Court Monday slapped down a new bid seeking to show that Barack Obama was ineligible to be elected president of the United States in the 2008 White House race.

The nation’s highest court refused to take up a case brought by three people “who claim President Barack Obama is not a natural born citizen of the United States of America and, hence, is ineligible to be the president,” court documents said.

The nine justices, meeting as they opened a new term, thus upheld a August 2010 California appeals court ruling which found that the “plaintiffs’ contentions lack merit.”

The appeals court also argued “the presidential nominating process is not subject to each of the 50 states’ election officials independently deciding whether a presidential nominee is qualified, as this could lead to chaotic results.”

Some rightwing conspiracy theorists have claimed that Obama, whose father was from Kenya, was not born on US territory, which would disqualify him for the presidency.

But official records show Obama was born in the state of Hawaii and the White House even released the official full version of his birth certificate in a bid to squash the debate.

Read Next
Losses, some wins in war on drugs
EDITORS' PICK
Malls adjust ‘NCR Plus’ operating hours for April 12-30 MECQ
Speed up your game with the new vivo Y20s [G]
Pru Life UK receives four golden arrows for solid corporate governance
Metro Manila to have shortened curfew hours from 8 p.m. to 5 a.m. under MECQ
Pre-order the new vivo Y20s [G] to get a free TWS earphone
‘NCR Plus’ to be under MECQ starting April 12 until April 30 — Palace
MOST READ
Stop ‘creeping occupation’ of ‘militia’ boats in WPS, Pacquiao asks China
Bea Alonzo clarifies status of her relationship with Dominic Roque
Convicted former aide of Sen. Bong Revilla dies — BuCor
Locsin to China: ‘Then move out’
Don't miss out on the latest news and information.

TAGS: Barack Obama, US Elections, US Politics, US Presidency, US Supreme Court