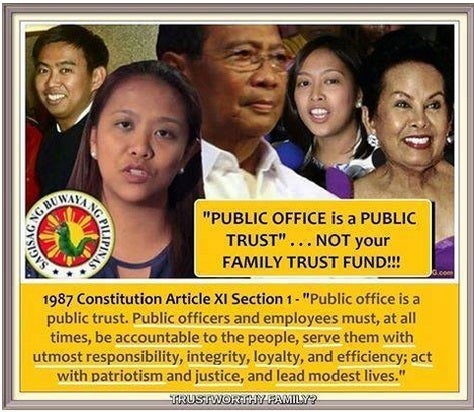 A screengrab from Facebook shows one of the memes being spread on social media to criticize the family of Vice President Jejomar ‘Jojo’ Binay. The VP’s son, suspended Makati Mayor Junjun Binay, belittled social media, which he said hosted many ‘paid hacks.’ FACEBOOK SCREENGRAB

Asked on ANC’s Headstart if the Binay family was “manhid” of all the criticisms its members get on social media, Binay expressed doubt whether opinions raised online reflected those of people in general.

Binay then questioned the credibility of criticisms and opinions expressed in social media.
“Maraming bayaran diyan,” (There are many paid hacks there) the younger Binay said.

Social media, mostly on Facebook and Twitter, has recently seen the spread of memes and posts criticizing the Binays for controversies ranging from alleged corruption to maintaining a political dynasty. CB