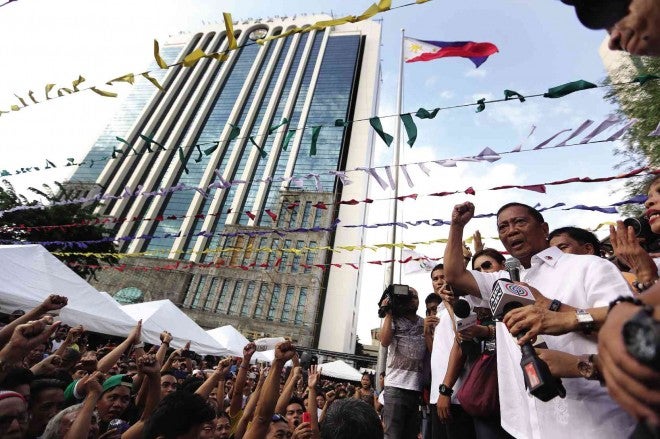 The entire Makati City Hall shut down its operations on Tuesday as the second suspension order on Mayor Jejomar Erwin “Junjun” Binay was served and posted at the entrance of the City Hall Building by officers of the Department of Interior and Local Government (DILG).

With the metal door at the City Hall entrance rolled down and hundreds of policemen barricading all entrances to the premises before offices opened at 8 a.m., it was impossible to enter the City Hall even for employees wanting to perform their daily job functions.

Armed with truncheons and shields, about 700 police officers heavily guarded the entrance of the City Hall building as DILG National Capital Region (NCR) officer-in-charge Maria Lourdes Agustin posted the 12-page suspension order of Binay and 14 other city officials in relation to the investigation of the construction of the Makati Science High School.

Tensions rose as Binay supporters tried to push their way through police barricades shouting “Papasukin niyo kami” (Let us in!) and even throwing monobloc chairs at some of the policemen. But some employees of the city hall claimed that the police were the ones who started the scuffle and pushed the people away from the entrance.

Christine Ramirez, an employee of the Makati Action Center, presented a medical certificate from the Ospital ng Makati showing that she sustained bruises on both her arms after the policemen pushed her with their shields and denied her entrance to the City Hall.

“I just wanted to get inside the building because we have work today,” Ramirez said, noting that the police continued pushing her and the rest of the crown gathered near the entrance of the city hall.

Barangay Carmona Bantay Bayan officer Eric Enriquez, meanwhile, was allegedly hit with a truncheon at the back of his head and was injured.

The tensions were not the only problem at the city hall as numerous clients wanting to avail of the services in the city were furious after knowing that they would not be able to continue with their transactions.

Maria Victoria Manalo, a Makati resident who was supposed to file the necessary documents for a criminal case she has been facing, asked the guards at the Old City Hall building why they were not informed that there were no transactions at the local government unit office.

“We want to get a certification to protect ourselves because we have a meeting with the fiscal on the seventh floor. We did not know that the offices were closed,” she told the Philippine Daily Inquirer in an interview.

The lockdown was also met with rage by city government employees, who lamented that it was the 30th and worried that they would not receive their wages if they failed to come in work.

Joey Salgado, Makati City spokesperson, said they would ensure that the city hall employees would receive their wages accordingly.

Binay said the closing of the City Hall offices was out of their control as hundreds of policemen would not allow their employees to get inside the building.

Policemen stationed at the City Hall grounds admitted that they were directed not to let anyone inside the building.

This was not the first heated incident on Tuesday.  Detailed policemen personally had an altercation with Vice President Jejomar Binay and his group who circled the Old City Hall building to ask the ground commander, Senior Supt. Elmer Jamias, to remove the barricades around the city hall.

The Vice President was caught on camera pointing his finger at Jamias, telling him that what they were doing was illegal and a way to harass their family and the city government.

But Salgado explained that the Vice President only went down to confront Jamias to tell them that what they were doing was wrong.

“Chief Insp. Gideon Ines refused to let the Vice President in the area so some of the supporters got angry and there was a short scuffle,” Salgado added.

He also noted that the injured residents like Enriquez and Ramirez will file cases against Jamias and his policemen.

Asked about Jamias’ plan to file cases of assault upon person in authority and threat and oral defamation against the Vice President and some of his men for the incident on Monday night, Salgado said it is their right.

“But we would like to remind them that the Constitution here in the Philippines should still rule. It seems like their imposing Martial Law-like situation in the city,” the city spokesperson added noting that people should still have the right to assemble and express support to the mayor.

Binay’s camp added they have filed a petition asking for a temporary restraining order (TRO) to the Court of Appeals on Monday with them hoping that until a decision is reached, the police and the DILG will respect them.