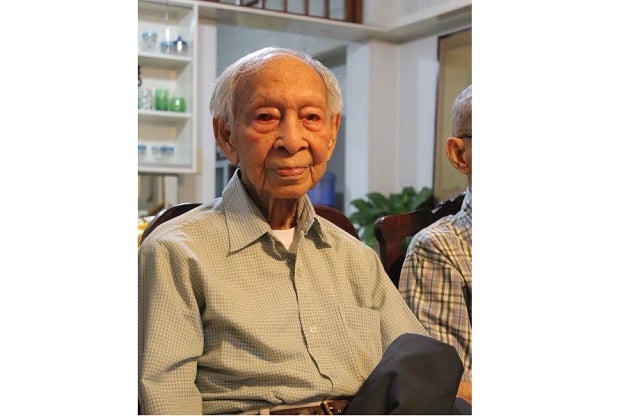 The Philippines is mourning the death of its oldest World War II veteran and the University of the Philippines’ oldest alumnus.

Engr. Fernando Perez Javier on Monday died in Baguio City due to illness. He was 107.

“The nation joins the Armed Forces and the University of the Philippines (UP) community in mourning the passing of Engr. Fernando Perez Javier,” presidential spokesperson Edwin Lacierda said in a statement on Monday.
“We remember Engineer Perez’s service during the war, and the valor and dedication with which he carried out his duty. The nation owes much to the service of patriots like him. May his life of service inspire today’s generation to serve their country with his loyalty, dignity, and steadfastness. In this time of grief, we extend our deepest condolences to his family,” Lacierda added.

The Philippine Veteran Affairs Office (PVAO), in a press statement, said his remains were cremated Monday afternoon and would be brought to Quezon City on July 2 to be interred at the Garden of the Divine Word Columbarium.

Javier was born on December 22, 1907, in Ilocos Norte and was among the survivors of the Bataan Death March in 1942.

The war veteran graduated at the University of the Philippines in 1933. He earned the distinction of being UP’s oldest living alumnus and was awarded as UP’s “Century Man” during its centennial anniversary in 2008.

The PVAO has offered interment with full military honors to Javier at the Libingan ng mga Bayani.