3 Koreans quarantined at RITM due to suspected MERS-CoV infection 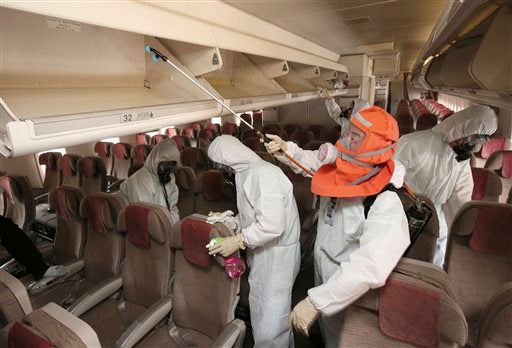 Three South Koreans are currently quarantined at the Research Institute for Tropical Medicine (RITM) in Muntinlupa City, after they showed symptoms of the Middle East Respiratory Syndrome-Corona Virus (MERS-CoV), according to a health official.

RITM is the primary hospital designated by the Department of Health to handle either suspected or confirmed cases of MERS-CoV cases.

Roman said the three patients underwent swab exams to confirm if they were infected with MERS-CoV. Results would be known Tuesday, said Roman.

MERS, which was first detected in April 2012 in Saudi Arabia, is considered a deadlier but less-transmissible cousin of the SARS virus. It carries symptoms that are similar to the common flu, including fever with cough, cold and sneezing. The incubation period of the virus is usually 14 days.

Earlier, the DOH advised the public to frequently wash their hands, to cover the mouth when coughing or sneezing and maintain a distance of at least one meter from others to avoid spreading viruses or getting infected.

To ensure that MERS-CoV would not go undetected in private hospitals, Health Secretary Janette Garin had met with representatives of private hospitals in Metro Manila to remind them of the need to take the proper travel history of patients and promptly report suspected cases to the government. SFM