Tuason seeks for immunity from all suits on Malampaya fund scam 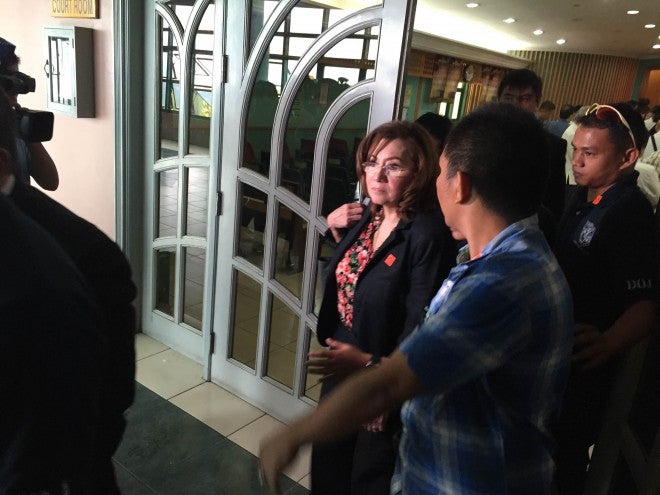 Socialite Ruby Tuason told the Sandiganbayan, on Monday, that she had applied for immunity from suit in relation to the alleged misuse of P900 million in government royalties from the Malampaya gas project.

In an apparent move to question her credibility as a government witness, lawyers of detained Sen. Jinggoy Estrada tried to grill Tuason on her involvement in the so-called Malampaya fund scam during the continuation of her testimony at Estrada’s bail hearing at the anti-graft court’s Fifth Division.

Tuason, who appeared antsy at times in her return to the witness stand, was accused of pocketing P242 million of the funds intended for victims of back-to-back typhoons, which wrought havoc in Mindanao in 2009, but were instead diverted to the fake foundations of businesswoman Janet Lim-Napoles, the suspected architect of the P10-billion pork barrel racket.

Quizzed by Sabino Acut Jr., one of Estrada’s counsels, during her cross examination, the witness said she applied for exclusion in all the criminal cases regarding the pork barrel and the Malampaya fund scams.

But State Prosecutor Hazel Valdez quickly opposed Acut’s line of questioning, pointing out that the issue over the Malampaya funds was not included in the criminal complaint filed by the Office of the Ombudsman against Estrada.

“Did you apply for immunity in the Malampaya case?” Acut asked Tuason.

To which the witness replied, “I applied for immunity for all (cases).”

“You applied for immunity for all? Including DAP?” asked Associate Justice Roland Jurado, Fifth Division chair, referring to the contentious Disbursement Acceleration Program of the Aquino administration.

“No. I don’t know anything about that,” she said.

Tuason also disclosed the reason why she decided to return P40 million to the government, the amount she allegedly earned as “agent” of Estrada and fellow detained Sen. Juan Ponce Enrile for the alleged funnelling of their Priority Development Assistance Fund (PDAF), more known as pork barrel, to Napoles-owned foundations.

“It’s for my peace of my mind,” she claimed.

Estrada, who was seated just a few feet away from Tuason, let out a laugh in apparent disbelief.

In an interview after the hearing, Estrada maintained that his lawyers pursued the issue of the Malampaya fund scam since Tuason herself included the matter in the sworn statements she submitted to the Ombudsman.

“I have also repeatedly told the public and the media that Tuason is the mastermind of the Malampaya scam,” Estrada told reporters.

“My lawyers were asking her about the Malampaya (issue) to test her credibility. And her application for immunity in the Malampaya case has yet to be granted as far as I know,” he added.

Acut’s insistence to discuss the Malamapaya fund mess and the contents of her affidavits triggered a verbal tussle between Paul Mar Arias, another lawyer of Estrada, and Dennis Manalo, Tuason’s private counsel.

Manalo, who helped Tuason in securing immunity from the PDAF cases, told the court that asking the witness about her sworn statements would violate the client-lawyer privilege.

Arias, however, clarified that Acut’s questions were only based on Tuason’s affidavit and her testimony during the Senate hearing in February 2014.

Estrada’s lawyer also questioned Manalo’s actions, noting that only Ombudsman prosecutors were allowed to speak to the court on Tuason’s behalf.

A visibly irked Jurado banged his gavel several times as he directed the lawyers to stop their argument.

Jurado then ordered Arias to pay a fine of P500 after he continued to speak despite the justice’s warning. SFM