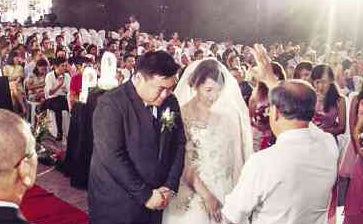 VOWS OF LOVE AND CHARITY. The Li couple during their May 24 Buddhist wedding at a campus gym in Manila, where the 600 guests include the latest donors and grateful scholars of the humanitarian group Tzu Chi Foundation-Philippines. PHOTO FROM TZU CHI FOUNDATION

When Lithium Jachin Li and Leanne Marie Yan exchanged vows recently, the P7.5 million in cash and checks they received as gifts quickly vanished from the bridal purse.

The Chinese-Filipino couple donated the money to the scholarship program of Tzu Chi Foundation-Philippines, benefiting thousands of indigent students.

“I hope that whatever blessings they receive, they also share with other people,” Leanne said, as quoted in a Tzu Chi statement announcing their donation.

The Lis were married on May 24 in a Buddhist ceremony witnessed by some 600 guests on the Tzu Chi Great Love Campus in Sta. Mesa, Manila. In an Inquirer interview, Lithium described it as a “simple” wedding held in a gym with no air-conditioning and followed by a vegetarian feast.

But up to P6 million worth of gifts poured in from the well-wishers, mostly Tsinoy businessmen and professionals. “We informed the guests before the wedding that all cash gifts would go to the foundation,” Lithium said. “We did not expect the amount to be that big and we were very grateful.”

An additional P1.5 million was donated by Lithium’s parents who have been active members of Tzu Chi Philippines since its establishment 20 years ago. His father, Alfredo Li, headed the family-owned Yana Chemodities Inc. for 36 years before handing over the company reins to his children.

Alfredo, now the foundation’s chief executive officer, said the P7.5-million donation would go to Tzu Chi scholars in the elementary, high school and college levels. The scholarship program, which has helped more than 5,000 students, extends P7,500 to P20,000 in assistance per beneficiary every school year.

“The wedding gifts also came from donors who were not able to attend the ceremony,” Alfredo said. “Others sent money after the wedding because they really believed in the cause of the foundation.”

Leanne was Lithium’s high school crush at Philippine Buddhacare Academy in Quezon City. But it was only in their college years that Lithium, then a marketing student at College of Saint Benilde, finally had the courage to get her number from a friend. By then she was a nursing student at University of the East-Ramon Magsaysay Memorial Medical Center.

“I texted her and we started to get in touch again. We became friends and eventually a couple,” he said.

And business partners, too. It has been a year now since they started their own company, Science & Engineering Solutions Inc., which provides lab equipment and technology services to government institutions, pharmaceutical companies and other businesses.

At the wedding reception, the scholars and their parents thanked the couple, the foundation and other donors through a sign-language rendition of “Gratitude,” the foundation’s musical theme.

Founded in Hualien, Taiwan, Tzu Chi Foundation has been engaged in various humanitarian works in Philippines since 1995.