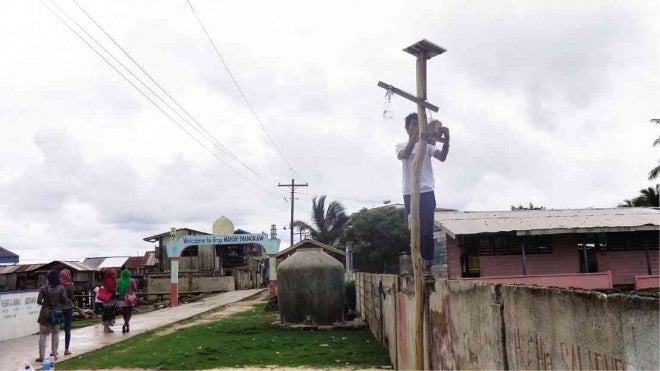 An hour by boat from the bustling port town of Bongao on the island of Manuk-Mangkaw here is a laid-back community where residents have electricity for only six hours a day.

The fishing village of mostly Sama and Tausug residents relies on power sold by Tawi-Tawi Electric Cooperative or from kerosene-fueled generators, which can run for only 12 hours.

During the holy month of Ramadan, the sputtering power supply proved problematic, as islanders who break their fast had to be awake in the wee hours to cook.

“They usually eat around 3 a.m., but electricity here is only until midnight, so it’s difficult,” said Harljun Jumaani, a community worker.

Worse, the power outage can stretch for long periods, with blackouts enveloping Manuk-Mangkaw for days, weeks and even a month, residents said.

Things started to improve with the entry of a training program aimed at teaching out-of-school youth how to set up and maintain solar lamps.

Some 25 youths were trained for 22 days, with BEAM providing tool kits, materials and P50 each in transportation allowance to encourage the trainees to finish the program, trainer Jumaani said. 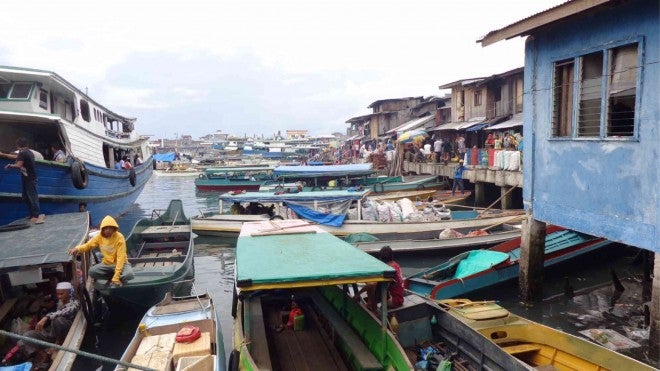 RICH BUT POOR The port of Bongao in Tawi-Tawi province is a trading and business hub so busy that boats compete for space. It serves as a gateway to the island-town of Simunul, one of the country’s most impoverished, and Sabah, now a progressive territory of Malaysia. FRINSTON LIM/INQUIRER MINDANAO

“I was excited upon hearing about the training. I was eager to learn,” said Jaison Sahid, 18, who has been out of school two years after graduating high school. Sahid and his friend, Ibrahim Abubakar, 22, joined other boys in installing a solar lamp near the police detachment at the village center.

The lamp, which was their post-training output, has been illuminating the area near the coast at night, drawing people and giving a semblance of nightlife to the island, according to Jumaani.

The trainees’ newly acquired skill could also be useful to fishermen in Manuk-Mangkaw, with their solar-powered lamps a handy tool in luring fish.

“Poverty and access to training and education, both economic and geographic access, as well as security conditions are the leading reasons why many (young people) drop out,” Bellen said.

“That’s why we have these programs. We wanted to contribute to poverty alleviation and peace building,” he said.

Bellen said the training provided by BEAM TVET was in line with the Technical Education and Skills Development Authority (Tesda), and finishers were given National Competency II assessment certification, thus providing them with “better options.”

“Our main objective is to improve the ‘employability’ of the youth. Even if they have low educational attainment, still they can be employable,” Bellen said.

Such programs are particularly given priority in hard-to-reach areas, like the archipelago comprising Tawi-Tawi, Basilan and Sulu provinces, “where services of this kind are less available,” Bellen said.

“That’s the reason we have these programs in Sitangkai (municipality), which can be reached almost overnight by boat (from the Zamboanga peninsula),” he said.

The TVET component, Bellen said, is a two-pronged approach, whereby trained graduates can get employed after acquiring the skills. The program also provides post-training support like job fairs, job referrals and capital opportunities to self-employed graduates with linkages to micro-financing institutions.

Bellen said the program was unique as it tried to be inclusive and gender-sensitive in its approaches.

“We strike a balance (when it comes to women participation), at least 50-50. This has a bearing on the way we design the program, like giving women greater access,” he said.

For example, half of the 4,500 trainees in various skills programs this year are women, up from last year’s 38 percent of a total of 5,272 out-of-school youths.

Twenty-four-year-old Roxanne Alani was among those who benefited from this gender-sensitive program. A daughter of a Sama carpenter, Alani loves to bake cakes and dreams of getting a hotel and restaurant management (HRM) degree at one of the province’s tertiary schools in Bongao.

But extreme poverty made the fifth child in a brood of 12 unable to continue schooling.

“I just help Mama at home. But I really wanted to go to college and study HRM,” the 24-year-old in yellow traditional Muslim garb told the Inquirer.

Alani said she was happy upon hearing about BEAM giving training on bread and pastry making in Manuk-Mangkaw.

For 18 days, she and 24 other girls on the island were taught how to make bread, cakes and even local delicacies.

Alani said cakes and bread were sought-after products in her village, especially during New Year, Hari Raya and other holidays and celebrations.

“I enjoyed it. It was like I was taking up HRM already,” Alani said. Another graduate, Jabira Bullang, said she could use the skill to help her mother put up a small cake business and earn additional income. The 20-year-old Sama girl said the money they would earn from selling cakes could help put her through college.

So far, the girls have sold some P300 worth of cakes since their May 22 graduation.