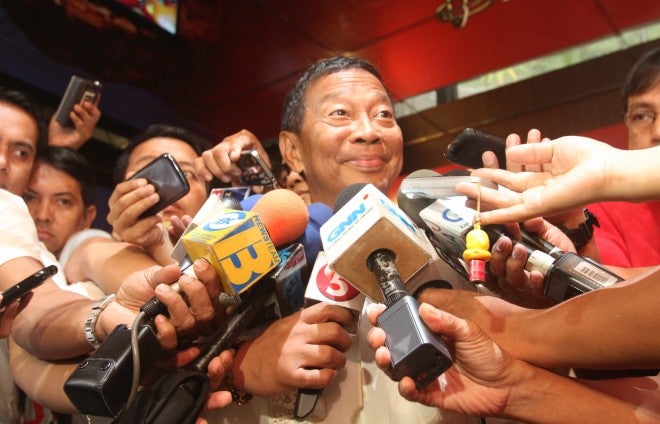 The non-commissioned survey, conducted from June 5 to 8 among 1,200 Filipino adults, asked respondents if they were satisfied with the work of Binay, Senate President Franklin Drilon, House Speaker Feliciano Belmonte Jr. and Chief Justice Lourdes Sereno.

From a peak of an “excellent” +73 in March last year, Binay’s net satisfaction fell repeatedly in the last several months until reaching its all-time low of +31 in March this year. It rose to +42 this month with 64 percent of respondents (from 58 percent) saying they were satisfied with his work, 22 percent (from 28 percent) saying they were dissatisfied and 13 percent undecided.

Sereno received a slight increase with a net satisfaction rating of +11 (from +10 in March). The latest poll showed that 37 percent were satisfied with her work, 25 percent dissatisfied and 28 percent ambivalent.

On the other hand, the two legislators’ ratings fell. Drilon’s net satisfaction rating was down to +29 in June (52 percent satisfied, 24 percent dissatisfied and 22 percent undecided) from +35 in March.

The survey was first published in BusinessWorld.

Read Next
Women flock to Japan zoo to see ‘hunky’ gorilla
EDITORS' PICK
Watch live performances by ITZY, Mamamoo and other K-pop stars on Smart’s GigaPlay App
A tribe under threat: Dumagat vs dams
97 areas in PH under Alert Level 4 — DOH
COVID-19 cases may peak by October — DOH
An innovative, fun shopping experience AllDay
Welcome the next imagery master with vivo X70 co-engineered with Zeiss
MOST READ
Roque not surprised by opposition to ILC nomination: They do not wish anyone to succeed
Son of prominent businessman nabbed in La Union for cocaine possession
Declaration of Pacquiao as PDP-Laban presidential bet illegal — Cusi wing
Drilon wants income tax records of Pharmally execs with luxury cars
Don't miss out on the latest news and information.