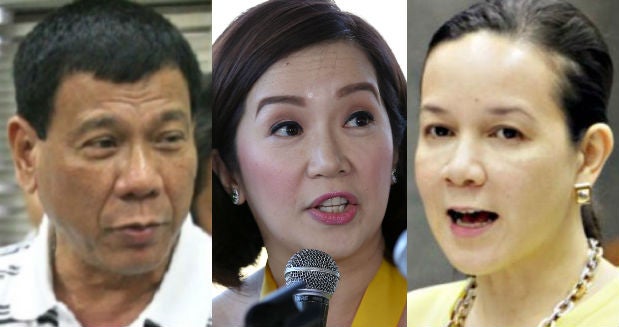 He may be known for his no-nonsense approach on crime and criminality, but in a televised interview on Wednesday, Davao City Mayor Rodrigo Duterte traded his tough stance for some candid remarks.

In a segment of the morning show “Umagang kay Ganda,” Duterte was shown photos of famous personalities and was asked to describe them one by one. The 70-year-old mayor got candid with his responses but maintained a straight-faced expression most of the time.

The first one was a photo of Justice Secretary Leila de Lima whom Duterte described as “pretty.”

Last May, Duterte and De Lima engaged in a word war over allegations that the former is part of the Davao death squad which is said to be responsible for the extra-judicial killings of suspected criminals in the city.

READ: De Lima to Duterte: Insult me all you want but I won’t clam up on DDS

“Well, she’s a lady. Pareho kami ng school niyan kaya shut up na lang ako (We belong to the same school so I will just shut up),” Duterte said. The two are graduates of San Beda College.

The next photo shown to him was that of television host and presidential sister Kris Aquino whom Duterte did not immediately recognize. “Ah kung sino man ‘yan, okay ‘yan (Whoever she is, she is okay),” Duterte said.

Other photos were that of talkshow host Boy Abunda and commedian Ramon Bautista, whom Duterte described as “good friends.”

Last year, Bautista was declared “persona non grata” by the Davao city council after calling women of the city “hipon” during a celebration of the Kadayawan Festival. Duterte forgave the comedian a few days after the incident.

Meanwhile, Duterte got more serious after a photo of President Benigno Aquino III was shown.

“Well, he’s the president and I supported him. I am bound by work, eh sinuportahan mo eh (I support him),” he said.

Photos of rumored presidential candidates Mar Roxas, Grace Poe, and Vice President Jejomar Binay were also shown to Duterte. He described them as “okay” and “good.”

Duterte currently ranks third in the recent Pulse Asia presidential preference survey behind Poe and Binay. He, however, continues to claim that he is not running for president in 2016.

In an interview on ABS-CBN News Channel’s ‘Headstart’ on Wednesday, however, he positioned himself as a possible alternative candidate for those who will not vote for either Poe or Binay.

READ: Why Duterte is hesitant to run for president

Not up for long courtship

The mayor also responded to questions on his love life, spilling that he had been rejected by women a couple of times already.

“Marami na pero ‘yung iba, binalikan ko na talaga eh pumayag naman. Napepeste siguro (I have been rejected by a number of women, but some of them reconsidered when I came back. They probably got pestered),” Duterte said, adding that he can no longer court women extensively because he is already old.

(I am already old. Don’t make it hard for me. I don’t have the looks to court someone for 2 years. I will give you three months.)

He added that he already had three girlfriends, and jokes that he might soon have a fourth one.

Not afraid of ghosts

Perceived as an iron man, Duterte said he was more concerned about his job than his fears.

Duterte also delved into the things that could scare an iron man like him, explaining that he is too old for such.

“I’m just a working government employee. It has nothing to do with bravery and courage. It has something to do with the sense of fulfillment of doing your job. Eh kung duwag ako o matapang ako (whether I am cowardly or brave), that’s besides the point. The point is I have a job to do,” he explains.

Asked if he’s scared of ghosts, Duterte said he never got the shivers for them.

(If a ghost touches me, I will slap it since I am not doing anything wrong. Don’t try to scare me because I am not the type to scare others. Try to use ghosts again, and I will kick you.) Arianne F. Merez, INQUIRER.net trainee/IDL