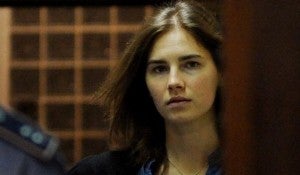 PERUGIA—US student Amanda Knox was acquitted of murder and sexual assault by an Italian court on Monday after breaking down in court and pleading for mercy in a dramatic end to her four-year legal battle.

She is expected to be released within hours form her prison in Perugia.

There were cries of “Shame! Shame!” and “Murderer!” from an angry crowd outside the courtroom immediately after the verdict.

The verdict overturns the 24-year-old’s convictions for the grisly killing of her British housemate Meredith Kercher on November 1, 2007 in the university town of Perugia in central Italy where both young women were studying.

Her boyfriend at the time, Raffaele Sollecito, who was appealing with Knox, was also acquitted of the charges, leaving only one person convicted — local drifter Rudy Guede, who like the other two has always denied murder.

Knox was sentenced to 26 years in prison and Sollecito to 25 in the original trial. Guede is serving out a 16-year sentence after exhausting his appeals.

The 21-year-old Kercher was found half-naked in a pool of blood on the floor of her bedroom in the cottage she shared with Knox. Her body was covered in knife wounds and bruises and investigators found traces of a sexual assault.

In the reconstruction of the crime put forward by prosecutors during the appeal trial, which began in November 2010, Kercher was sexually assaulted by Guede and then held down by Guede and Sollecito while Knox wielded the knife.

Knox initially told police she was there at the time of the murder and falsely identified the owner of a local bar where she worked as the killer.

But she later argued that the statement was only given under heavy questioning and has since said she was at Sollecito’s house the whole night.

“I did not kill, I did not rape, I did not steal. I wasn’t there,” the tearful Seattle native told the court earlier on Monday as her family wept, before the eight-person jury retired to consider the dramatic verdict.

“I am paying with my life for a crime I did not commit,” an ashen-faced Knox said, speaking in almost flawless Italian with her hands sometimes joined as if in prayer in a hushed courtroom and other times holding the bench for support.

“I want to go home. I want to return to my life,” she said in a statement that she had to interrupt frequently as she struggled to contain her emotions.

“I am not the person they say I am. I am not into perversion and violence,” she said, after her accusers told the court that she was a “she-devil”.

Kercher’s family meanwhile complained their loved one had been “forgotten” in a case that has focussed on the figure of Knox and they lashed out against what they called a “large PR machine” working to secure Knox’s acquittal.

“The brutality of that night, everything Meredith went through, the fear, the terror, she didn’t deserve that,” Kercher’s sister Stephanie said, wiping away tears in a rare press conference in Perugia ahead of the verdict.

“Mez has been forgotten in all of this. It’s difficult to keep her memory alive. We’re here today to find justice,” she said, urging jurors to ignore the “media hype”. Four hundred journalists are covering the trial in Perugia.

Appeal verdicts that overturn the original case are relatively rare in Italy but Knox’s defense had the upper hand for much of the appeal, particularly after independent experts cast serious doubt on some crucial DNA evidence.

Sollecito also spoke before the verdict, saying: “I have never hurt anyone in my life.” He took off an arm band with the inscription “Free Amanda and Raffaele” and presented it to the court as a symbol of their innocence.

Under the Italian justice system, the eight-person appeal court jury that issued the ruling included main judge Claudio Pratillo Hellmann himself, another judge and six jurors from the general public.

Prosecutors had asked for the sentences to be increased to life in prison because of the lack of a motive for the killing.