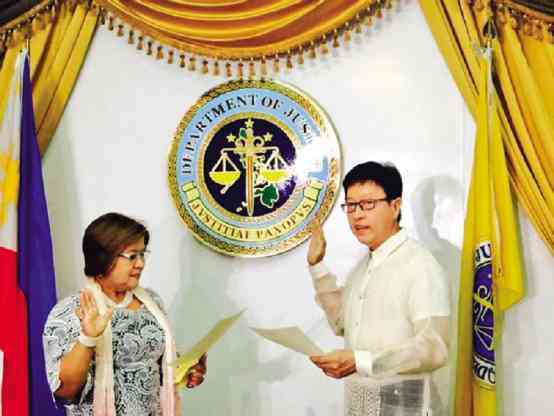 This was the marching order of Justice Secretary Leila de Lima to Ricardo Rainier Cruz III, a retired Army general who took his oath Tuesday as the new director of the Bureau of Corrections (BuCor).

“The job he’s going into is such a Herculean one, and therefore I’m sure that he is actually up to the challenge. I always have high expectations when it comes to those being given the opportunity to serve in very crucial institutions like BuCor. BuCor, as you very well know, is among the major constituent agencies of DOJ,” De Lima said at the rites.

In reply, Cruz said: “I’ve always promised to everyone whom I’m going to serve that I will really accomplish orders given to me. So, rest assured, Ma’am, you won’t regret choosing me.”

Asked about his priorities, the new BuCor chief said he would focus on “cleaning” the country’s biggest penitentiary, New Bilibid Prisons (NBP) in Muntinlupa City, whose past officials had been repeatedly exposed for extending VIP treatment to moneyed inmates.

“We have to clean the NBP. We have to apply equal treatment to the inmates. With that, we can now look into the welfare of the inmates. So, I have to remove the VIP treatment. I have to stop the entry of luxury items,” Cruz said.

He said he would also launch an anticorruption drive at the BuCor, citing his experiences in fighting corruption in the military. Cruz, 57, handled various provincial commands during his 38-year stint in the Philippine Army, where he had served in bidding committees and intelligence units.

“When I saw his accomplishments as an officer in the Armed Forces, I told myself that I think he has the right mettle,” the secretary said, referring to the new appointee.

Cruz, she said, should also start the preparations for the planned construction of a new prison facility in Laur, Nueva Ecija province, that would house inmates from the NBP and the Correctional Institute for Women in Mandaluyong City.