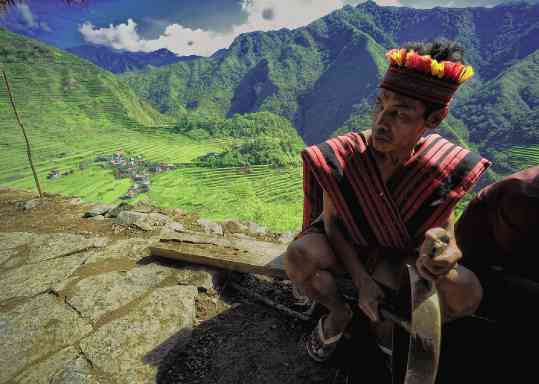 IN IFUGAO, forests sustained by communities are vital to the survival of the province’s rice terraces. EV ESPIRITU

What was the mountain like before the first settlers of Mayoyao town in Ifugao province turned it into layered rice paddies?

Anthropological studies suggest the area was originally brushland and the settlers forested the area themselves. That explains the dedication and communal sense of ownership that characterizes modern rice terrace farming today.

“It has been told through generations that the first settlers in Mayoyao did not find any forest,” says Eudes Enkiwe, 73, elder of Mayban village.

Citing oral accounts, Enkiwe says forest resources were essential in building the community that they have today. Early settlers had to trade in the lowlands for lumber before the forests started to grow, he says.

“Mayoyao hunters went as far as the border of Isabela province for materials such as cogon for roofing, and timber for house building and fencing,” he says.

As rice cultivation flourished, the Ifugao realized the value of trees for water retention and for erosion control. So aside from timber products, the hunters took from their travels the seeds of trees which they planted in Mayoyao.

The terrain of Mayoyao today rolls down into the familiar rice terraces, but the upper slopes feature densely wooded areas.

“A family that owns a rice field also manages and maintains a mini forest,” Enkiwe says.

The mini forest, locally called pinucho, mitigates erosion and serves as a watershed. But it is also where the family gets materials for house-building and fuel.

It was no accident that Mayoyao hunters brought with them hardwood as well as softwood species, says Enkiwe.

Hardwood species, such as yakal (mahogany) and amugawon (molave) that thrive in Mayoyao, are made into house posts and frames. Amugawon is also used to carve the anthropomorphic figure bulol (or bul’ul), the Ifugao rice granary guardian.

Softer wood varieties, such as the red Philippine timber, called kalantas or kalante, are also preferred for their natural fragrance and resistance to woodborers.

Enkiwe says the flower tree, called palajon, is a first class firewood because it can already be used even when freshly-cut.

The community requires quick access to their pinucho, so many communal woodlands are propagated beside houses or house clusters.

“A true pinucho is measured in terms of a few hundred square meters, never in hectares,” Enkiwe says.

The use of resources from a pinucho is limited only to family members. People in the community who are not related to a family owning a pinucho could avail themselves of materials but they need to ask permission.

A pinucho can provide a range of resources for a family—be it a system to preserve water for irrigation using the alimit and kebkeb tree varieties, or the potent sap of a wood called pohgue, which is used to harvest fish.

Enkiwe says some wildlife also thrive within the pinucho, among them the wild fowl and the monitor lizard (called banyas in Ilokano and bayawak in Tagalog), because it is a “forest ecosystem” in a scaled-down sense.

A father of six, Enkiwe is the steward of his family’s pinucho in Mayban village. But the care of this backyard forest is limited only to the pruning of branches to allow the succeeding saplings to grow, and stem propagation for trees like halepeng.

Pinucho owners adopt a practical system of resource management. “When we cut trees, we select only those that are mature enough,” says Enkiwe.

This system of forest management (also known as muyong or pinugo) has been endorsed for adoption by the Department of Environment and Natural Resources for old growth forests, but Enkiwe does not think it applies to large forests.

“In the first place, the pinucho follows a system of private ownership. Who would own the [old growth] forest? If the government regulates the use of forest resources under the indigenous management model, how much access would it allow for communities that are dependent on resources from old growth forests?” he asks.