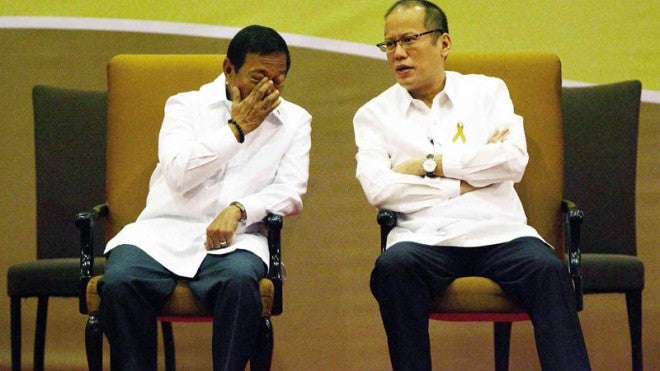 SEPARATE WAYS President Aquino and Vice President Jejomar Binay share the stage during happier times at a meeting on overseas Filipino workers’ concerns in Pasay City. Tired of being the punching bag of Aquino’s allies, Binay resigned from the Cabinet on Monday. LYN RILLON

Fed up with being a punching bag of President Aquino’s allies, Vice President Jejomar Binay decided to quit and hit back at his former colleagues in the Cabinet.

Rep. Abigail Binay said that it was just a matter of time that her father would resign from the Cabinet as overseer of the administration’s program on overseas Filipino workers and housing, especially with the coming deadline for filing of certificates of candidacy in October.

The Makati City representative went to Malacañang to see Executive Secretary Paquito Ochoa Jr. to hand in her father’s letter of “irrevocable” resignation addressed to Aquino. She was accompanied by Undersecretary Benjamin Martinez, the Vice President’s chief of staff.

Ochoa “gave the letter to President Aquino, following which the President called up Vice President Binay to confirm his resignation,” Coloma said. No details were given about the phone conversation.

Senate President Franklin Drilon, vice chair of the ruling Liberal Party (LP), said the resignation meant that Binay could now take the role of opposition leader. “The lines are really drawn now. You have the administration and the opposition,” Drilon said in a phone interview.

In a radio interview, Abigail Binay said her father’s letter to Aquino was one sentence long indicating his “irrevocable resignation” with no reason or personal affection.

“He resigned on his own, he was not pressured. I don’t think there was anybody who could change my father’s mind,” she said.

The daughter was cryptic in her replies to questions about her father’s resignation. She said the Vice President would issue a statement later.

When asked if there was a falling out with the President, Abigail Binay said: “I am not in the right position [to answer that] but he seems to be very tired; and in his view, this is the only way he can be liberated.”

She said her father had been “holding back” from all the beatings he had been getting from the administration allies.

A lengthy investigation conducted by a Senate blue ribbon subcommittee composed of administration allies alleging that Binay had illegally amassed wealth through kickbacks and shady deals when he was mayor of Makati City had substantially eroded the high popularity ratings of the Vice President as a front-runner in next year’s presidential election.

On whether her father has some ill feelings toward the President, Abigail Binay said: “Bad feelings? Personally, I think it is not with President P-Noy but the terrible attacks against my brother and our family. That is what has affected him and not because he is angry or has a personal issue with P-Noy.”

On whether the Vice President has ill feelings toward Interior Secretary Mar Roxas, the potential Liberal Party presidential candidate next year, Abigail Binay said, “Who is that?”

Abigail Binay hinted that her father was “fed up” with the “fakery or pretension” in trying to fit in the Cabinet. The Vice President was absent from last week’s Cabinet meeting but she said this did not mean her father was not invited.

A year ago, Caloocan Rep. Edgar Erice, a ruling LP stalwart, urged Binay to quit saying he could not continue being the opposition leader while enjoying the benefits of being an Aquino ally.

The daughter explained her father had “programs that he wants to pursue before he steps down,” and that he felt he was still needed. “All things have the right time and right reason,” she said.

She said her father originally planned to personally hand the letter to Aquino but decided at the last minute that a family member should hand in the letter because they were unsure if the President would grant him an audience.

“I want to make it clear that there are no bad feelings between the Binay family and the Aquino family,” the congresswoman said.

“It was tiring for him to be getting all the punches without punching back. He was tired of being treated as a punching bag and not being able to fight back. Now, he feels liberated,” Abigail Binay said.

Speaker Feliciano Belmonte Jr. told reporters that it was high time Binay left because “he does not feel comfortable in [the] Cabinet.”

Freed from his Cabinet duties, the Vice President would have more elbow room to gather “evil forces” from the regimes of Ferdinand Marcos to Gloria Macapagal-Arroyo, Erice said.

“He will now use the administration as his punching bag and hit it to his heart’s content hoping that this might divert the corruption issue being thrown [against] him. A trapo at heart and mind, VP Binay will now see and say an all-evil description of the government that he had served for five years,” Erice said.

“In 2013, he headed UNA (United Nationalist Alliance) which fielded opposition candidates against the administration. I felt it was only a matter of time when he would resign from the Cabinet to officially and formally assume the position of head of the opposition party and be its official candidate for President,” Treñas said.

Sen. Francis Escudero said he guessed Binay was “already now planning to hit and criticize the President and his government because, by resigning, he was already distancing himself from it without any real reason or provocation.”

Sen. Antonio Trillanes IV, Binay’s main tormentor in the Senate, said: “Finally! This is a very positive political development. Now, there is no more inconsistency in the ‘tuwid na daan’ slogan of the P-Noy administration. More importantly, it can now go all-out against Vice President Binay.”

Former Sen. Panfilo Lacson said the “inevitable has happened” and that the only question was why Binay resigned only now.

Will Binay resign from Aquino Cabinet?