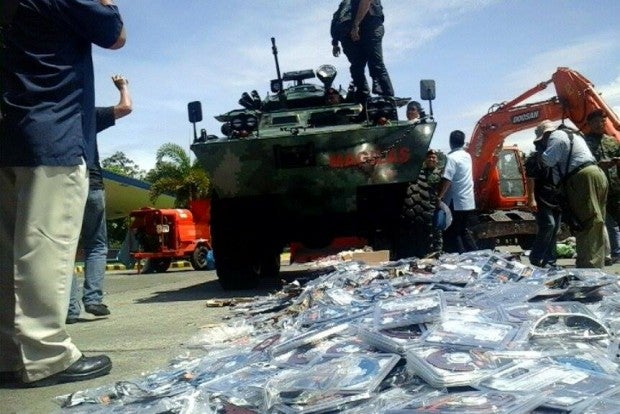 PHOTO by JAN ESCOSIO/RADYO INQUIRER 990AM

The Philippine National Police (PNP) on Monday staged the ceremonial destruction of pirated and counterfeited items worth P100 million on Monday at Camp Crame in Quezon City.

Some of the seized items were pirated DVDs of local and foreign films and knock-offs of branded sunglasses, bags, shoes and shirts. Fake beauty products and counterfeit medicines, which include sex enhancing drugs and abortifacients from China, were also destroyed.

Two heavy equipment vehicles from the Department of Public Works and Highways (DPWH) and an armored personnel carrier from the PNP Special Action Force were used to crush the counterfeit goods.

Other government agencies which witnessed the ceremony include the National Book Development Board, the National Telecommunications Commission and the National Bureau of Investigation.

The destruction of the pirated and counterfeit items is part of the celebration of the World Anti-Counterfeiting Day. Sheen Limbo, Inquirer.net intern/AJH 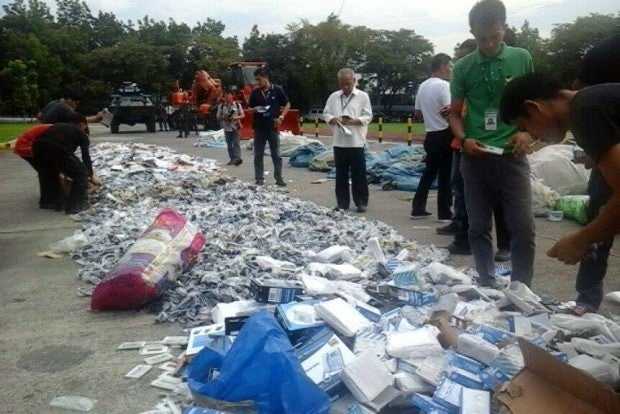 PHOTO by JAN ESCOSIO/RADYO INQUIRER 990AM