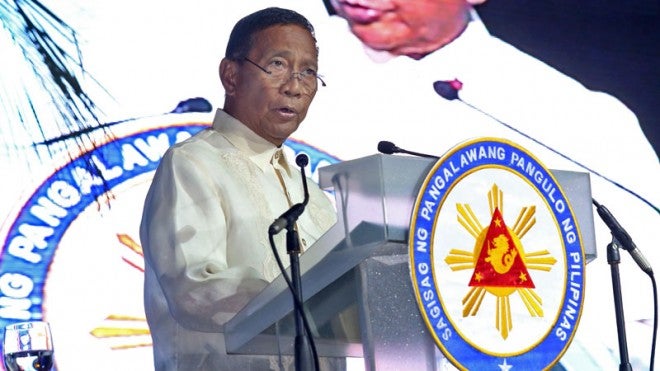 Vice President Jejomar Binay, who has fallen to second place among the preferred presidential candidates in the 2016 elections, is now the most trusted government official, results of a Pulse Asia survey released on Monday showed.

President Benigno Aquino III obtained a 50 percent rating, a significant recovery from last March’s 36 percent which has been his lowest rating since he became president in 2010.

According to the media release of Pulse Asia, only Binay enjoyed a majority trust rating among the top five government officials included in the survey.

Binay is also trusted by more than half of residents in Luzon (63 percent), Visayas (53 percent), Mindanao (50 percent) and the National Capital Region (52 percent). He failed to get a majority trust rating in Class ABC but got 55 percent and 66 percent in classes D and E, respectively.

Aside from topping the list of most trusted government officials, Binay is also the official who garnered the highest approval rating with 58 percent.

Binay’s current approval rating is a 12 percent increase from his rating last March.

Aquino is a close second with an approval rating of 54 percent. Among the government officials included in the survey, his approval rating improved the most, as he gained a 16 percent increase from his rating last March.

Binay enjoys majority approval from all geographic areas and social classes, except Class ABC where he only gained 43 percent.

On the other hand, Aquino failed to obtain majority approval rating in NCR and Class ABC but got the majority in other geographic areas and social classes.

The Supreme Court enjoyed the highest approval rating with 44 percent, followed by the Senate at 40 percent and the House of Representatives at 35 percent.

Pulse Asia also noted that the three government institutions failed to clinch a majority approval rating across all geographic areas and social classes.

The survey was conducted from May 30 to June 5 with 1,200 respondents. It had a plus or minus 3 margin of error and 95 percent confidence level.