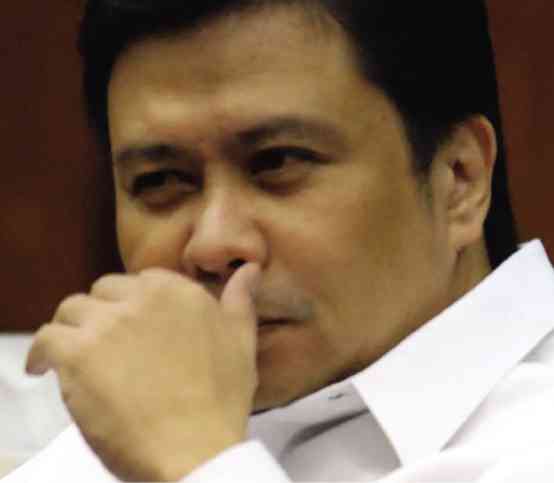 Detained Sen. Jinggoy Estrada on Friday described as “blackmail” the testimony of socialite Ruby Tuason implicating him in the P10-billion pork barrel scam, and said she turned state witness after he refused her alleged demand for money.

Estrada, who is standing trial for plunder and graft in the Sandiganbayan, belied Tuason’s testimony at his bail hearing in the antigraft court’s Fifth Division last Monday.

The senator said Tuason had asked money from him when he called her while she was hiding in the United States at the height of the pork barrel controversy in 2013.

“When I did not give in to her demand, she started to talk with the DOJ (Department of Justice) for her inclusion in the Witness Protection Program,” Estrada said in a statement.

Tuason, the prosecution’s latest witness against the senator, was among those charged for the misuse of the P900-million Malampaya fund that was supposed to go to energy development projects.

Government prosecutors said Tuason had received at least P242 million for her role in diverting the Malampaya fund to the bogus nongovernment organizations of businesswoman Janet Lim-Napoles, the suspected mastermind of the pork barrel scam.

Tuason, who served as social secretary to former President and now Manila Mayor Joseph Estrada, Senator Estrada’s father, testified that she flew to the US in August 2013 after she was implicated in the scam that had lawmakers funnelling their Priority Development Assistance Fund (PDAF) allotments to Napoles-owned foundations.

She returned to the country in February last year and turned over to the government the P40 million she reportedly earned from the PDAF scam in exchange for immunity from suit.

On the witness stand, Tuason claimed she had delivered at least P19 million as Senator Estrada’s payoff at his San Juan residence and at his office in the Senate.

Estrada flatly denied the accusation and said Tuason’s testimony was meant to “save her skin at (the senator’s) expense.”

He also threatened to sue Tuason for “blurting out these lies, concocting stories and twisting the truth to save her neck from sure punishment” for her alleged role in the Malampaya fund scam.