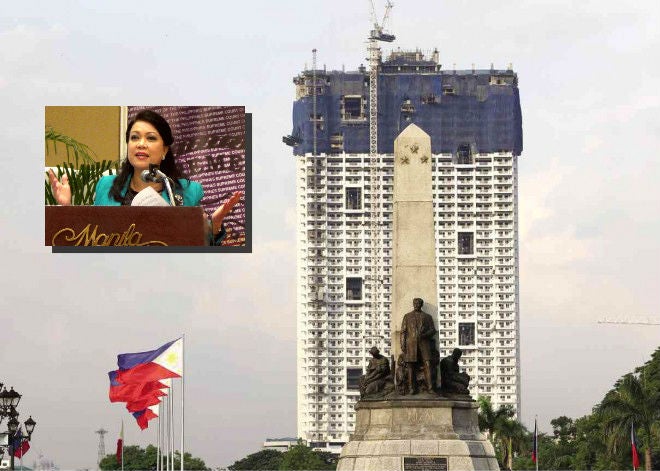 In a statement released by the Supreme Court Public Information Office, Sereno admitted that her husband, Mario Jose Sereno, was connected with Dacon Corporation, a Consunji-owned corporation but that he resigned from that company 26 years ago, July, 1989. The Consunji family owns DMCI Homes, the developer of Torre de Manila, the building that mars the view of the Rizal Monument.

A newspaper report said Sereno, who voted against a restraining order to stop the construction of the condominium ‘lawyered’ for DMCI Homes.

High Court’s Information Chief Theodore Te said Sereno is “mindful of the procedures for causing the voluntary inhibition of any judge or Justice from any pending matter.”

“The Chief Justice’s husband, Mr. Mario Jose E. Sereno, was connected with Dacon Corporation, a Consunji-owned corporation, but resigned from that company almost 26 years ago, in July 1989,” Te said.

Te explained that under the Supreme Court Internal Rules, Rule 8 Section 3 (c) said any mandatory inhibition arising from membership of a Justice with a law firm that acted as counsel ceases within a period of 10 years unless the Justice personally handled the matter.

“The supposed connection of the CJ’s spouse to a party in a pending case is not a ground for mandatory inhibition; note also that the connection ceased 26 years ago,” Te said. IDL