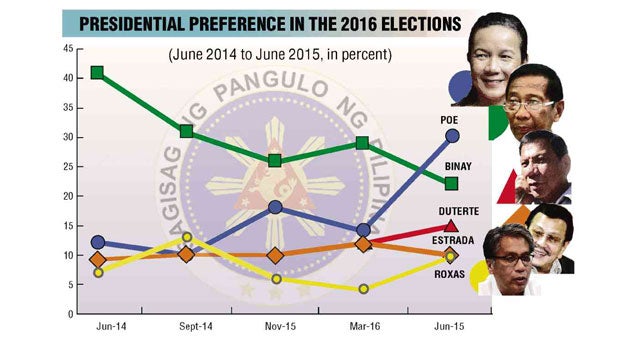 Her surging numbers in a nationwide survey may finally inspire Sen. Grace Poe to run for higher office next year, as the politics of the underdog seems to be working in her favor.

Derided as a foundling and, thus, arguably not a natural-born Filipino qualified to run for President, Poe vaulted over Vice President Jejomar Binay in the results of the latest Pulse Asia survey.

The results showed that the neophyte senator, adopted daughter of the late actor Fernando Poe Jr. and actress Susan Roces, has become the No. 1 presidential candidate of choice of voters for the 2016 national elections if it were held today.

Binay was the erstwhile front-runner until the attacks on Poe, launched by the Vice President’s camp when the survey was being conducted, appeared to have backfired.

Reports of his huge bank accounts, based on data gathered by the Anti-Money Laundering Council, may also be eroding Binay’s numbers.

Poe, who has not confirmed her intention to run either for President or Vice President, also maintained her lead among vice presidential hopefuls, the results of the survey released on Thursday showed.

Nationwide, those preferring Poe as their presidential candidate went up 16 percentage points to 30 percent in June from 14 percent in March.

Voter preference for Binay, who is facing corruption charges for alleged irregularities in Makati City when he was mayor, suffered a 7-point drop to 22 percent from 29 percent in March.

Binay was the leading presidential aspirant with 41 percent in June 2014, but his numbers declined to 31 percent in September 2014 and to 26 percent in November 2014 as reports of his alleged hidden wealth mounted, exposed through the Senate blue ribbon subcommittee hearings.

The survey, conducted from May 30 to June 5, covered 1,200 respondents, 18 years old and above. It had a margin of error of plus or minus 3 percentage points.

The respondents were asked, “Of the people on this list, whom would you vote for President of the Philippines if the 2016 elections were held today and they were candidates?”

Poe also increased her lead among potential vice presidential candidates to 41 percent from 29 percent in March.

Sen. Francis “Chiz” Escudero, who recently announced his disinterest to run for President, remained in second place with 15 percent, down by a point from 16 percent.

Cayetano remained in third place with 12 percent from 13 percent, followed by Duterte and Sen. Ferdinand “Bongbong” Marcos Jr. who shared the fourth spot with 9 percent apiece.

Poe was the preferred President across geographic areas, posting double-digit increases in the rest of Luzon (36 percent from 13 percent), Metro Manila (32 percent from 18 percent) and the Visayas (30 percent from 16 percent) except in Mindanao (15 percent from 11 percent).

Pulse Asia noted that 14 of the 46 possible senatorial candidates, who are either incumbent or former members of Congress, have a “statistical chance” of winning a seat in the Senate.

Leading the senatorial race are Lacson (67.4 percent) and Sen. Vicente Sotto III (63.4 percent), who both have the statistical ranking of first to second places. 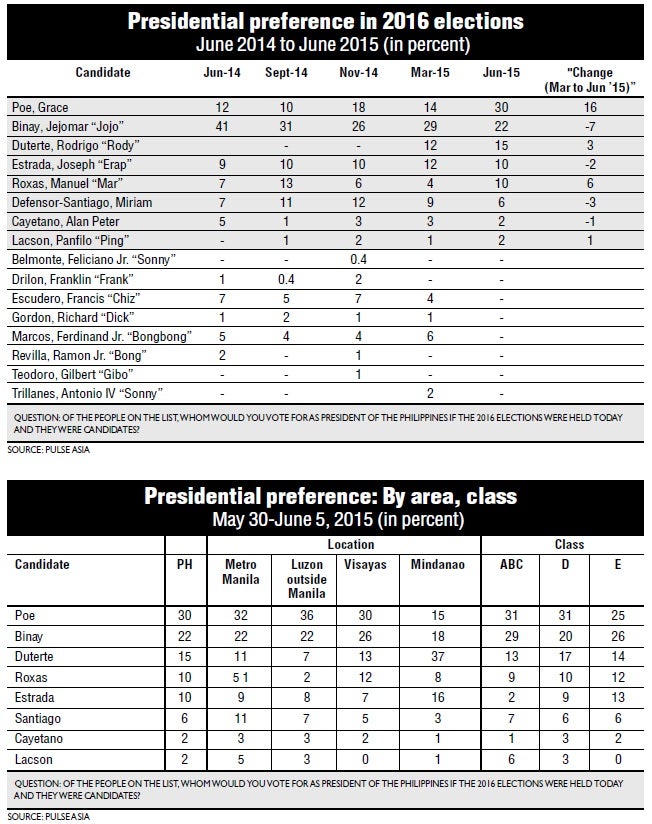 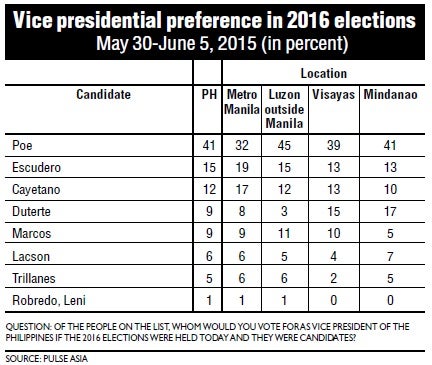