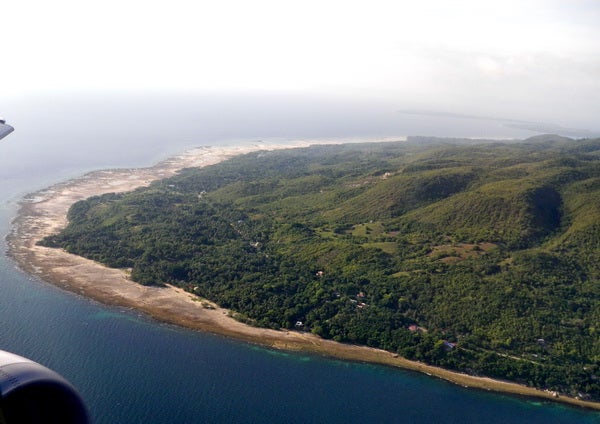 The uplifted coastal zone in the waters of Loon and Maribojoc in Bohol was declared a geological monument by the Department of Environment and Natural Resources. PHOTO FROM MINES AND GEOSCIENCES BUREAU WEBSITE

The Department of Environment and Natural Resources (DENR) has declared a “geological monument” the coastal areas in two municipalities of Bohol that were uplifted by the 7.2-magnitude earthquake that struck the province in 2013.

In a statement on Wednesday, DENR Secretary Ramon Paje said he issued Administrative Order No. 2015-08 after the Mines and Geosciences Bureau (MGB) found “unique geological features” at the Loon-Maribojoc coastal areas following the 2013 quake.

“The department order declaring the uplifted coastal area a geological monument serves to provide a legal framework for the recognition, preservation, and protection of the uplifted coast, as well as encourage further researches and studies on the monument for the advancement of geosciences in the country,” Paje said.

Covering 137 hectares or 1.37 kilometers of coastline within the towns of Maribojoc and Loon, DENR said the uplifted areas “constitute an irreplaceable segment of the earth’s history and geological heritage.”

It passes through two barangays of Maribojoc, namely Guiwanon and Punta Cruz, and four barangays of Loon, namely Cuasi, Song-on, Tangnan, and Tontonan.

DENR defines geological monuments as sites that “show outstanding features or processes considered by geologists and other scientists as worthy of conservation.”

Under the DENR order, MGB was tasked to conduct ground verification of the area, which will be followed by the installation of a marker containing the “history, description, and significance” of the new geological monument.

DENR said MGB would also coordinate with other concerned agencies to craft a management plan: “The plan will focus on enriching understanding and appreciation of the geological phenomenon, and the promotion and maintenance of the area as a potential ecotourism destination, as well as for scientific and educational purposes.”

Other geological monuments in the Philippines earlier declared by DENR were the Chocolate Hills also in Bohol; Hundred Islands in Pangasinan; Sand Dunes in Ilocos Norte; St. Paul Limestone Formation in Puerto Princesa, Palawan; Taal Volcano in Batangas, and the Montalban Limestone Gorge in Rodriguez, Rizal.