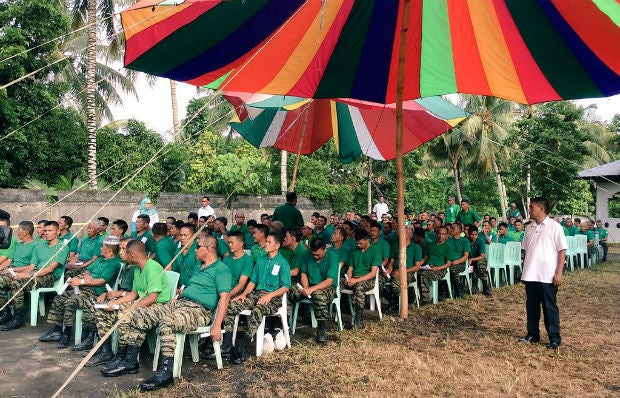 Iqbal said people would think that firearms were the source of the MILF’s strength. In reality, however, its strength is the love, affection and faith of the Bangsamoro people.

“The Bangsamoro people are the beginning and the end of our struggle,” Iqbal said at the turnover ceremony.

He said the decommissioning also signaled the start for the MILF’s shift to self-governance.

“This symbolic decommissioning signals the start of an old arrangement and control toward partnership of autonomy,” he said.

“We proclaim our commitment to peace not by words but by action,” Murad said.

BBL based on CAB

Ebrahim thanked President Aquino and all those who contributed to the success of the Mindanao peace process.

“We thank the President for his continued support to the Midnanao peace process, third party facilitator, international communities and all who contributed to (its),” he said.

Asnawi said it was hard to be “separated from a long-time companion,” referring to their firearms.

Defense Secretary Voltaire Gazmin, who arrived ahead of President Aquino, said he hoped that more disarmament rites would follow.

In a statement, Presidential Adviser on the Peace Process Secretary Teresita Quintos Deles said she was confident that the start of the decommissioning process would have a “positive effect on the legislative process” on the proposed BBL.

Governor Mujiv Hataman of the Autonomous Region in Muslim Mindanao, said President Aquino’s third visit to the region was most symbolic.

“As soldiers (they) will begin to bring life to the land instead of taking from it,” he said.

Hataman said mothers would now also “begin to send their children to school again without fear, and welcome them home happily.”

“Today, children will start learning to be children, and hope never to learn about war again,” he said.