US putting weapons in Poland amid Russian ‘threats’—minister 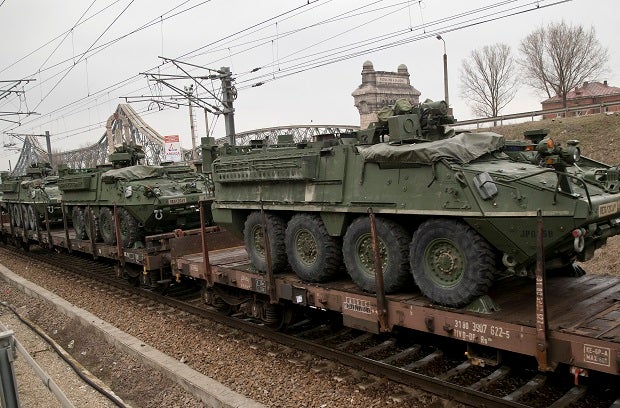 US military armored vehicles are transported on a freight train near the Black Sea port of Constanta, Romania, Sunday, March 15, 2015. The defense minister of Poland said the US might put heavy weapons in that country amid perceived threats from Russia. AP

WARSAW, Poland — The U.S. will “soon” take a decision to place heavy army equipment in warehouses in Poland for decades to come, the eastern European country’s defense minister said Sunday.

A former Moscow satellite, Poland believes that its security is threatened by Russia’s hostile actions in neighboring Ukraine and is seeking permanent U.S. and NATO presence on its territory and in the region, as a deterrent.

“Decisions are near,” he wrote.

Siemoniak did not specify numbers or what type of equipment was being discussed. The White House and the U.S. defense secretary need to approve such a move.

Siemoniak told the PAP news agency that if such warehouses with equipment are placed in Poland, they will remain “for years and for decades.”

“It is not a temporary reaction to crisis,” he said.

Poland’s General Command spokesman, Col. Artur Golawski, said on Twitter that efforts have been taken to find locations where the equipment could be placed.

NATO is holding massive sea, land and air exercises this month in Poland, the Baltic states and Romania in response to calls from these members for greater security reassurance.

Among the thousands of NATO troops is the new rapid reaction force, the so-called spearhead, agreed on at a NATO summit last year. It is testing it relocation and cooperation potential in southwestern Poland.