Pakistan shuts offices of Save the Children | Inquirer News

Pakistan shuts offices of Save the Children 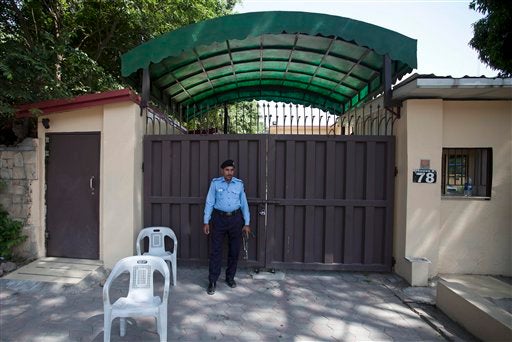 A Pakistani police officer stands guard outside a sealed ‘Save the Children’ office in Islamabad, Pakistan, Friday, June 12, 2015. The Pakistani government shut down the offices of the international aid group for violating its charter, the country’s interior minister and officials said Friday. AP Photo

ISLAMABAD — The Pakistani government shut down the offices of the international aid group Save the Children in the capital, Islamabad, accusing it of violating its own charter.

Authorities placed a lock on the gate of the group’s offices Thursday night and asked employees to leave.

They also told Pakistani employees that the government wanted all foreign nationals working with the charity to leave the country within 15 days. The officials spoke on condition of anonymity because they were not authorized to speak to the media.

Pakistani Interior Minister Chaudhry Nisar Ali Khan said Friday that the group violated the charter under which it was allowed to operate in Pakistan.

“No NGO will be allowed to work against the interest of Pakistan,” he told reporters.

In a statement, Save the Children confirmed that its office in Islamabad had been closed by the government.

“Save the Children was not served any notice to this effect. We strongly object to this action and are raising our serious concerns at the highest levels,” it said, added that the group has worked in Pakistan for over 35 years and that currently it had 1,200 employees nationwide— none of them a foreign national.

The State Department also expressed concern over the crackdown on the group.

State Department spokesman John Kirby late Friday said that Save the Children was one of many such organizations that had long operated with transparency and in close coordination with Pakistan’s government.

He said Pakistan’s international development partners respect the need for full transparency from international non-government organizations about their activities within the country.

“For that reason, we urge the Government of Pakistan to standardize and streamline a transparent process that will allow INGOs, including Save the Children, to work legally in Pakistan,” he said.

Save the Children’s Pakistan operations have been under intense government scrutiny due to a local belief that the organization was somehow connected to the May 2, 2011, killing of al-Qaida leader Osama bin Laden. A vaccination campaign, run by a Pakistani doctor, was used by the CIA to obtain DNA samples in the city of Abbottabad, where bin Laden had been hiding in a secured compound.

A Save the Children employee in Islamabad told The Associated Press that the doctor, Shakil Afridi, had twice attended training workshops organized by Save the Children in 2009 and 2010 to train Pakistani doctors about the health care needs of children and mothers.

“That was the only link of Dr. Shakil Afridi with Save the Children. He was among more than 1,000 doctors who were trained by us about the health care of mothers and children,” he said.

The employee spoke on condition of anonymity because he was not authorized to speak to media on the record.

He said a government commission formed to investigate bin Laden’s killing questioned the group about the purpose of Afridi’s visits to Save the Children and that the group had fully satisfied the commission’s concerns.

He said the commission’s report was never made public, but “We had unofficially been told that Save the Children has been absolved of links to Dr. Shakil Afridi.”

The group said that last year, programs in health, education and food security reached more than 4 million children and their families.

“All our work is designed and delivered in close collaboration with the government ministries across the country, and aims to strengthen public service delivery systems in health, nutrition, education and child welfare,” it said.