Two opposing groups trooped to the Chinese Consulate in Makati City on the national day of independence to condemn China’s harassment against the Philippines in forcibly reclaiming parts of the West Philippine Sea.

The groups, composed of around 1,200 participants, were led by Pilipinong Nagkakaisa para sa Soberanya (P1NAS) formed to fight for the country’s sovereignty amid the escalating tension due to China’s expansion.

Waving both anti-US and China banners, the groups assembled on the corner of Gil Puyat and Makati Avenues and marched to the Chinese consular office to hold a protest.

“Naiipit tayo sa dalawang nag-uumpugang bato. We are neither for the Dragon nor the Eagle. We have to look at our own national interest. Hindi ‘yung kakapit lang tayo sa kung sinong superpower,” Reyes said in an interview.

“We are reminded that the Philippines is not truly free,” he added.

Just like in previous protests, Paner wore a headdress—a miniature BRP Sierra Madre, the rusty and dilapidated Philippine Navy ship that served as home to troops in the disputed Ayungin Shoal.

Celia Veloso, mother of Mary Jane Veloso, also participated in the protest. She, however, refused to be interviewed by INQUIRER.net.

The rally leaders held a short program in front of the Chinese Consulate. As they wrapped up the program, protesters led by Roilo Golez started to march from the opposite end of Gil Puyat Avenue but refused to join the militant groups.

Golez and members of the “Di Ka Pasisiil Movement” marched, some riding motorcycles, to the consular office of China but waited until the militants have dispersed.

“No, we’re not joining them. Of course not. That’s a group that wants us to be alone against China. Alliances are not bad. In the end that’s for national interest. We can’t defend ourselves alone versus a giant,” Golez said.

“It’s their agenda. It’s our agenda. We shouldn’t mind then. It’s their prerogative. This is a free country,” added the former national security adviser.

From the Chinese Consulate, the militants trooped to United States Embassy along Roxas Boulevard in Manila where they also held a program.

No tension arose between the protesters and personnel from the Manila Police District and Regional Public Safety Battalion after militant leaders negotiated with the police.

Women’s rights group Gabriela also joined the protest and urged the people to stand up against the “rape of Philippine motherland” by China and US.

“The US and China are blatantly pursuing competing interests in the race to gain hegemonic control of the Asia-Pacific region at the expense of the Filipino people’s sovereign right over our own national territory,” said Joms Salvador, Gabriela secretary general.

“They may have different strategies but both of them are players in a macho war game much like gang-rapists bickering about who beds the victim first,” Salvador said.

With President Benigno Aquino III taking the side of US, the group says he is practically serving the country’s national sovereignty on a silver platter to the Americans.

Supt. Albert Barto, Ermita police station commander, said the protest in Manila had been peaceful with no violence or untoward incident reported.

Unlike in earlier protests at the US Embassy where police usually clash with rallyists, police seemed lenient when it allowed some of the militants to rest on the lawn close to the gate of the embassy.

“We are not necessarily lenient. We are just doing our job,” Barto said. RC 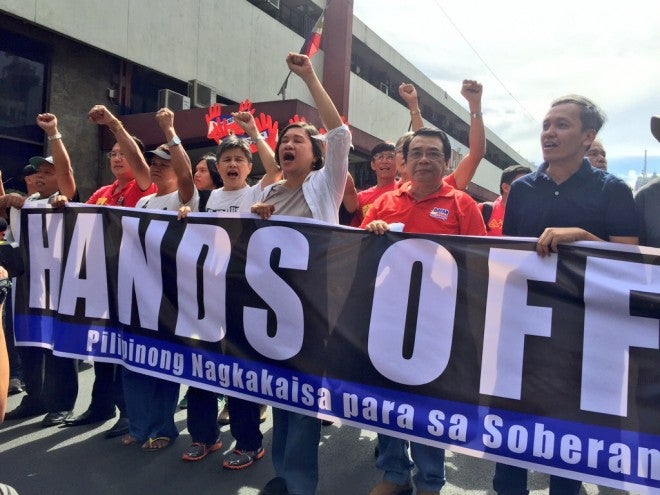 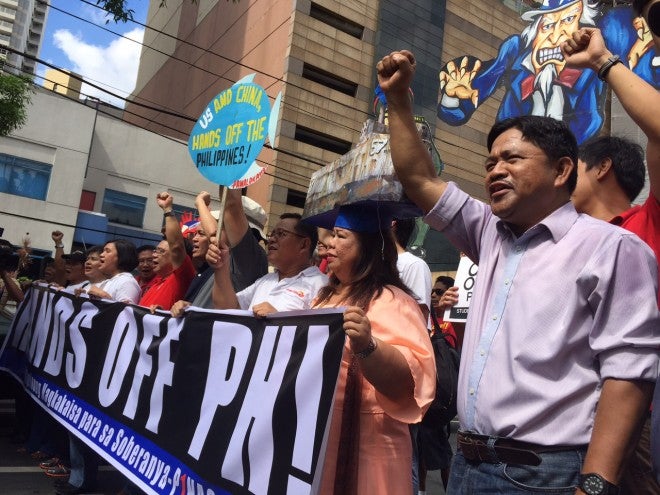 The 1,200-strong participants of the protest wave anti-US and China banners as they assemble on the corner of Gil Puyat and Makati Avenues.