Bongbong Marcos: My BBL will be based on logic | Inquirer News
Close
menu
search

Bongbong Marcos: My BBL will be based on logic 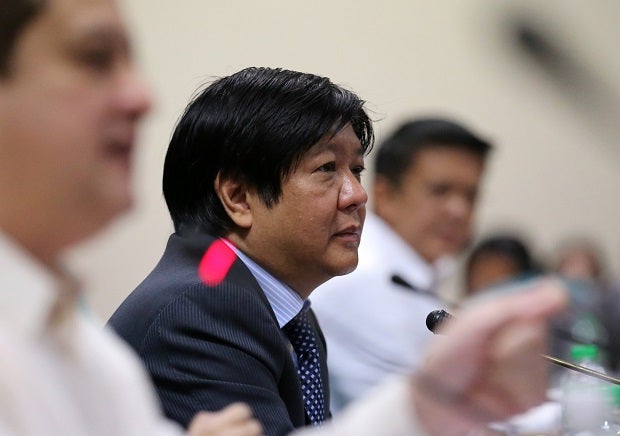 Among the provisions that Marcos intends to change are those on the powers of the Bangsamoro parliament, on the region’s contribution to the national government, and on the ownership of natural resources.

The senator is set to submit a substitute bill to replace the Palace-sponsored Bangsamoro Basic Law (BBL), which he said had a lot of questionable provisions.

“So certainly their concerns and their issues will be addressed; perhaps not in the way that they want. But again I am very confident that if we sit down and go through it rationally and logically and objectively, that they will understand that these things were necessary—whatever changes we instituted will be necessary,” he said in a statement.

According to Marcos, the criticism against a substitute bill is premature because he has yet to complete it. He intends to write the measure during the congressional recess and intends to have it ready when sessions resume on July 27.

Marcos said he wants to amend the provision in the draft BBL that grants the Bangsamoro exclusive powers and the use of natural resources in the areas under its jurisdiction.

“In the Constitution it is very clearly stated that all natural resources found within Philippine territory belongs to the State, and this one (draft BBL) is changing that altogether,” he said.

He also plans to amend the portion on the powers of the Bangsamoro parliament, which in the draft BBL will be allowed to change the powers and functions of local governments within its jurisdiction “in the interest of good governance.”

“But that essentially is an amendment to a national law and that puts Bangsamoro parliament equal to Congress. That’s not possible,” he said.