Aquino still mum on anointed one 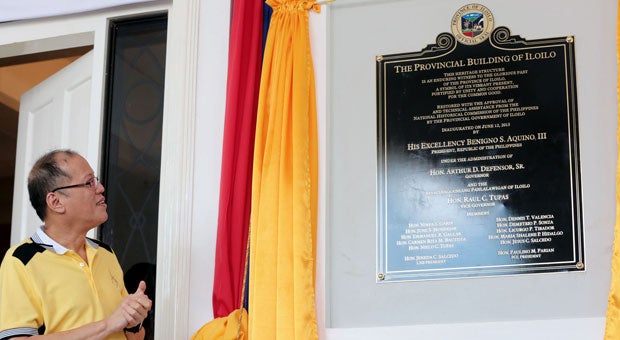 ILOILO CITY, Philippines—President Aquino himself on Thursday dashed hopes Vice President Jejomar Binay might have seeking his endorsement as the administration’s presidential candidate in next year’s election.

Speaking to reporters, Aquino said the support he could give Binay was to ensure credible and orderly elections.

“That is the minimum I could give to any candidate. Perhaps that is my last major task,” the President said.

Binay told a news conference on Wednesday that he was hoping President Aquino would consider endorsing his presidential candidacy.

He said he was hoping for a come-from-behind support from the President, like Sen. Francis “Chiz” Escudero’s homestretch swing to his side in 2010 that gave him the vice-presidential election.

Senate President Franklin Drilon, an LP stalwart, on Thursday said the President’s endorsement was reserved for a party member.

Speaking in a radio interview, Drilon said Aquino “would not endorse a candidate who is not from the Liberal Party (LP).”

LP members snorted at Binay’s expectations, with Caloocan Rep. Edgar Erice saying the President was not thinking of endorsing the Vice President, “not even in his dreams.”

In Iloilo City on Thursday, Aquino said it was unclear to him whether Binay was seeking his support for the Vice President’s presidential bid in 2016.

The President said it would be “presumptuous” for him to say that Binay was seeking his support because the Vice President allied himself with a different party and other groups in the 2010 and 2013 elections.

“Then come 2016, we will be together? It’s like, it turns out he is coming to us but he took a long detour to get to us,” Aquino said.

Binay is a longtime friend of the Aquino family. His political career began when then President Corazon Aquino, mother of the current President, appointed him officer in charge of Makati City after the Edsa People Power Revolution in 1986.

Binay and his family have ruled the city since. He is now embroiled in corruption allegations, with former allies accusing him in the Senate of amassing ill-gotten wealth during his term as mayor of the city.

At the news conference at the Iloilo provincial capitol, the President was flanked by Drilon and Interior Secretary Mar Roxas, the LP’s presumptive presidential candidate.

Aquino gave no indication that he had already chosen a presidential candidate for 2016.

He said he would finish his “consultations” before announcing his chosen candidate.

Aquino has said he will announce his choice after he addresses a joint session of Congress for the last time on July 27.

The President, however, was vague about his meeting on Wednesday with Sen. Grace Poe, who topped the 2013 senatorial election and has emerged as a potential presidential candidate next year.

It is believed that the LP is wooing Poe to be Roxas’ vice-presidential running mate.

President Aquino said that at their meeting, Poe appeared to be interviewing him, particularly on the administration’s poverty alleviation projects, such as the conditional cash transfer (CCT) program.

He said he told Poe that it would take time for programs like the CCT to bear fruit.

“We had some clarity about perspective … the viewpoints on governance, she agrees. She said we should see eye to eye on what should happen, which is the continuance of the current governance,” Aquino said.

The President said he and Poe discussed “many more details, but it’s still a work in progress.”

Speaking to reporters in Makati City on Thursday, Poe said the President did not offer her anything during their meeting in Malacañang on Wednesday afternoon.

Poe refused to disclose her plans for 2016, but said she and Escudero “were talking about possibilities.”

She said she had “a lot of things to consider” before deciding to run.

“I know that people are saying, ‘You’re just playing hard to get.’ [But] this is not an easy decision to make,” she said.

“I don’t have the machinery, I don’t have the money. [W]hat I have is a dream and the thought that it is indeed a privilege to have something to do, to be part of making our country better,” she said.

Poe said the presidency is a privilege, not something that could be easily desired.

“It is a huge challenge. Six years of your life, it’s almost like being in a convent. You always have to be detached but immersed at the same time,” she said.–With reports from Leila B. Salaverria and Maricar B. Brizuela in Manila; and Nestor P. Burgos Jr., Inquirer Visayas