Thousands of protesters marched through Makati City’s business district on Wednesday, demanding that Vice President Jejomar Binay drop his plan to run for President next year as Sen. Aquilino “Koko” Pimentel III vowed to break up the Binay political dynasty.

Led by entertainers Jim Paredes, Leah Navarro and Cynthia Patag, the #StopBinay protest was joined by people from various sectors of the Makati community, exceeding the 200 that the organizers said they had expected.

“We only expected about 200 people to show up but we were shocked that those people also brought other people with them,” Paredes told reporters.

The march started from Freedom Park at Ayala Avenue and Gil Puyat Avenue and made its way to the side streets and underpasses of Ayala and ended at the Ninoy Aquino monument at Paseo de Roxas.

“We have finally walked our talk,” Paredes said, addressing the protesters who demanded an end to the rule of politicians with questionable integrity.

“The Vice President does not deserve to be President. Today, we declare that we must #StopBinay,” the organizers said in a statement.

Paredes said Binay owed the people a lot of explanation for the charges of corruption against him in the Senate and the Office of the Ombudsman.

A Senate blue ribbon subcommittee is investigating allegations of corruption against Binay during his three terms as mayor of Makati.

Binay is also facing plunder and graft charges in the Office of the Ombudsman in connection with the construction of Makati City Hall Building II, allegedly overpriced at P2.3 billion.

“He has refused to show up in Senate hearings. I think as a possible presidential candidate, he should at least answer the charges against him,” Paredes said.

Binay’s invariable answer that the charges are politically motivated is not enough, Paredes said.

“That is a lame answer. So if the government is timid in treating him, it’s time the people spoke up,” he said.

Paredes said the online movement was inspired by the Senate inquiry into the alleged overpricing of the building and the other charges against the members of Binay’s family, including the alleged cornering of contracts such as for the supply of birthday cakes for the city’s senior residents, catering and maintenance services at Makati City Hall. 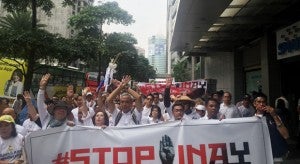 Protesters led by musician-writer Jim Paredes (center with gray hair) and other members of the civil society reach Ayala Avenue on Wednesday in a rally called Stop Binay. They urge Vice President Jejomar Binay not to run for President in 2016. NESTOR CORRALES/INQUIRER.net

“It took a while for us to realize that we should go beyond posting memes and opinions on Facebook,” Paredes said, explaining why the movement held a protest rally only on Wednesday.

“When the Binays talk, it’s as if they were already the winners. We want them to know that there are many people who will not vote for them,” Paredes said.

Binay’s son, Jejomar Erwin “Junjun” Binay, is mayor of Makati. His daughter, Mar-len Abigail Binay-Campos holds the seat of Makati’s second district in the House of Representatives. Another daughter, Maria Lourdes Nancy Sombillo Binay, was unknown but was elected to the Senate in 2013.

In their statement, the organizers of #StopBinay expressed confidence that with proper information, the people will be able to choose the right leaders and reject those who will lead the country backward.

If a Senate substitute bill against political dynasties becomes law before next year’s elections, the Binays will be facing tough choices.

Pimentel, chair of the Senate committee on electoral reforms, said his “stricter” substitute bill would allow only one member of a family up to the second civil degree to hold elective office if a national office is concerned.

If it is approved in its current form before the next elections, Vice President Binay may not be able to run for President since Senator Binay’s term would not end until 2019, Pimentel said.

For the Vice President to pursue his presidential ambition, Senator Binay would have to resign, he said.

Mayor Binay would also be unable to run for reelection, Pimentel said.

The bill would also prohibit siblings from concurrently serving in the Senate, he said.

In the House, however, the antipolitical dynasty bill could institutionalize the dominance of political clans.

Speaker Feliciano Belmonte Jr. on Wednesday said he agreed with some House members whose view was to allow other members of political families to branch out and run for elective posts in “other political jurisdictions.”

Belmonte said the maximum of two positions per family proposed under the antipolitical dynasty bill would apply only to the family’s province, with other members of the family allowed to run in another city or province.

But House members have yet to decide whether to allow other family members to run in provinces, cities, towns and barangays (villages), he said.

“I agreed because a political dynasty is largely localized and not on a national scale. A dynasty in Quezon City has nothing to do with a dynasty in Taguig or Makati,” Belmonte said.–With reports from Leila B. Salaverria and Gil C. Cabacungan

#StopBinay protesters call on VP not to run in 2016