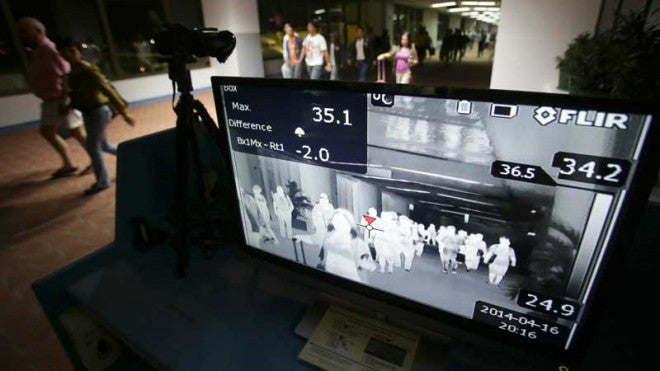 Passengers walk past a thermal scanner at the medical quarantine area at the arrival section of Manila’s International Airport in Paranaque. AP FILE PHOTO

Health Secretary Janette Garin on Wednesday said there was “no reason to panic” over the Middle East Respiratory Syndrome (MERS) since the Philippines remained free of the dreaded disease.

Garin spoke amid fears that the deadly disease again entered the county after a doctor-couple from South Korea, who had treated a patient with MERS, visited the Philippines.

Garin, in an interview with Radyo Inquirer, said the South Korean couple had tested negative for the disease.

The health official further tried to allay the public’s fears by saying that the MERS virus was not airborne but was mainly transferred through respiratory droplets.

Despite this, the health official urged the public to be careful by maintaining a strong immune system, engaging in proper hygiene and having enough rest and sleep.

She appealed to returning overseas Filipino workers (OFWs) to be honest about their health conditions and to correctly fill out survey forms given out upon their arrival in the country.

Seeking not to rely solely on the thermal scanners set up in various airports in the country, Garin said it would be important for OFWs to declare if they were experiencing possible MERS symptoms.

An early diagnosis, she said, is very important in the treatment of MERS.

“The survival rate is high if it is diagnosed early,” she said in Filipino.

According to latest reports, nine persons have died of MERS and almost a hundred cases have been confirmed in South Korea.