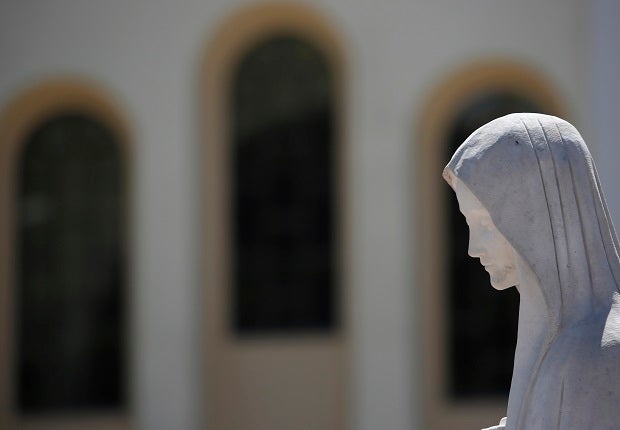 In this photo taken on Tuesday, May 12, 2015, shows the religious statue depicting the Virgin Mary in Medjugorje, Bosnia and Herzegovina, a site of pilgrimage for some millions of faithful, 200 kms (125 miles) south of Sarajevo. The Medjugorje statue marks the site where six local youths said they had regularly seen visions of the Virgin Mary in 1981, however the Vatican does not officially recognized the reported apparitions and so when the Pope visits Bosnia later this year, he is not expected to visit the site of Catholic pilgrimage. (AP Photo/Amel Emric)

VATICAN CITY — Pope Francis gave a hint Tuesday about his take on the reported apparitions of the Virgin Mary at the Medjugorje shrine in southern Bosnia, dismissing a reliance on regular visions of the Madonna as mere “novelty-seeking” for the faithful.

Francis spoke during his morning homily, three days after making a day trip to Sarajevo. En route home, Francis told reporters the Vatican would soon decide whether to formally recognize the Medjugorje phenomenon as authentic.

In his homily, Francis dismissed those “who always need novelty in their Christian identity” and say: “But where are the visionaries who tell us today about ‘The letter that the Madonna will send tomorrow at 4 p.m.?'”

“This isn’t Christian identity,” he said. “God’s last word is called Jesus and nothing more.”

The Medjugorje apparition has been disputed since 1981, when six youths said they had regularly seen visions of the Virgin there. Unlike Fatima in Portugal or Lourdes in France, the Vatican has been cautious about calling the sightings authentic. Neither Rome nor the local diocese has approved Medjugorje as an official shrine site and the Vatican has told dioceses not to organize official pilgrimages there.

That hasn’t stopped the remote village 70 miles (110 kilometers) southwest of Sarajevo from thriving from the financial boost brought by more than 30 million faithful who have visited since 1981.

The local church itself has cast doubt on the sightings, in part because one of the visionaries says the apparitions have continued regularly for over a quarter century.

In 2010, then-Pope Benedict XVI formed an international commission to study the Medjugorje phenomenon. On Saturday, Francis said commission’s report had been taken up by the Congregation for the Doctrine of the Faith, although the Vatican spokesman, the Rev. Federico Lombardi, said it hadn’t yet been discussed.

Lombardi acknowledged that Francis was probably referring to Medjugorje in his homily but he stressed that his brief mention was not the Vatican’s final word. Francis’ off-the-cuff comments “are not an official pronouncement that gives a wide-ranging and articulated doctrinal or pastor indications,” he said.