Gov’t says drop in unemployment levels due to youth programs

The Philippine government on Tuesday welcomed the results of the recent Labor Force Survey (LFS), saying youth and skills matching programs played an important role in the improved employment figures.

The April 2015 LFS showed that unemployment dropped to 6.4 percent this year, from 7 percent in 2014. This means there are now 2.68 million unemployed Filipinos, from 2.92 million last year.

“These figures indicate that the number of unemployed Filipinos declined by 243,000 since April 2014, while the number of workers who consider themselves underemployed declined by 44,000,” Presidential Spokesperson Edwin Lacierda said.

In a separate statement, Lacierda said the “encouraging figures reflect the results of the Aquino administration’s investment in the Filipino people.”

The spokesperson told INQUIRER.net that among the Aquino administration’s investments were the training programs under the Technical Education and Skills Development Authority (Tesda).

“By working with DOLE and CHED (Commission on Higher Education), Tesda is able to match the skills they teach with those needed by companies, and thus help their graduates find gainful employment,” he said.

Among the programs cited by Baldoz were the Special Program for Employment of Students (SPES), Youth Entrepreneurship Program, Government Internship Program, and JobStart.

Jobstart is a joint program of the Department of Labor and Employment (DOLE), the Asian Development Bank and the government of Canada.

Lacierda said it has enabled beneficiaries to connect with employers looking for interns. The on-the-job opportunities are supposed to improve their chances of finding work.

“The program especially targets ‘at risk’ youth, or young workers who have the least access to productive work,” he said.

During the launch of Jobstart last year, Baldoz said the country’s unemployment rate will go down by at least half if youth unemployment was addressed. 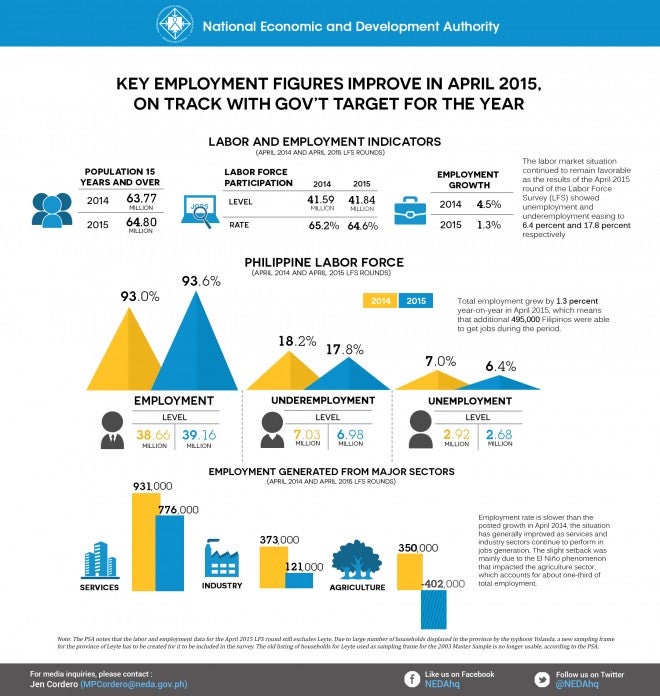 Read Next
Coddlers of Edsa ‘hulidap’ cops warned
EDITORS' PICK
Climate Change Commission and Nestlé PH to discover sustainability-focused solutions
Isko Moreno bares ‘two-pronged’ approach to rehabilitate MSMEs
Legarda emphasizes role of ICC/IPs in nation building this IP month
What’s at stake for every fighter at ONE: NextGen
‘Flattered’ Pacquiao to push through with presidential bid after being eyed as VP
Gordon calls 2 Pharmally execs ‘Senate fugitives’ after no-show in probe
MOST READ
Drivers with no traffic violations can now renew licenses for 10 years
Yang’s Princeton degree raises eyebrows among senators
Gordon to Duterte: You? Teaching me courtesy?
LJ Reyes says Paolo Contis made ‘no efforts’ to talk to her after their split
Don't miss out on the latest news and information.