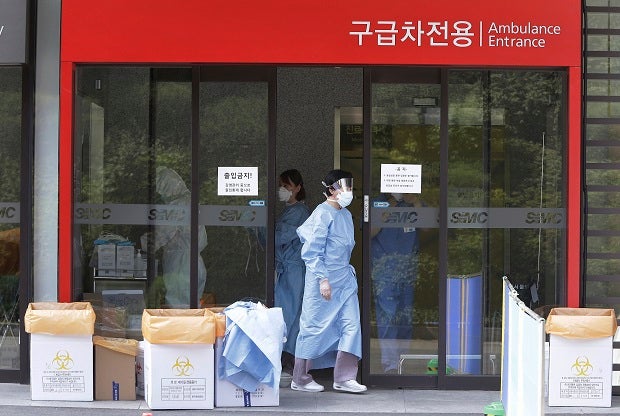 A hospital worker wears a mask as a precaution against the MERS, Middle East Respiratory Syndrome, virus as she comes out from an emergency room of Samsung Medical Center in Seoul, South Korea, Sunday, June 7, 2015. A seventh person in South Korea has died of the MERS virus, as the government announced Sunday it was strengthening measures to stem the spread of the disease and public fear. AP

The latest fatality involved a 68-year-old woman who came into contact with a MERS patient at a hospital in Seoul on May 27 and 28, the health ministry said.

The ministry stressed all seven fatalities had pre-existing health problems before they contracted the virus, with the seventh suffering from a heart condition.

Eight new cases were also confirmed Tuesday, in comparison to 23 on the day before.

That brings the total number of infections to 95 from just four cases two weeks ago, in the largest outbreak of the disease outside Saudi Arabia.

The outbreak in South Korea, first confirmed on May 20, has sparked mounting public concern.

It has seen more than 2,500 people placed under quarantine orders and nearly 2,000 schools — mostly in Seoul and surrounding Gyeonggi province — closed down.