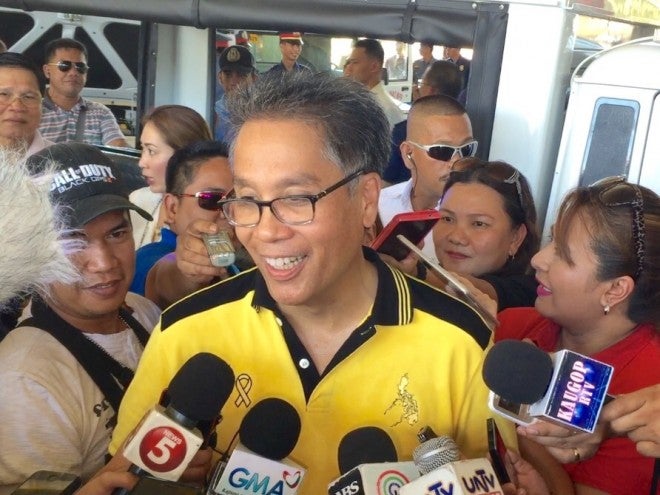 President Aquino has given the Liberal Party (LP) the go-signal to support Interior Secretary Mar Roxas’ aspirations to become President “to the extent that we all can,” Budget Secretary Florencio Abad said on Monday.

That does not mean, however, that Roxas is Aquino’s chosen candidate for next year’s presidential election, as the President has said that he will announce his choice only after he addresses a joint session of Congress for the last time on July 27.

Abad explained that Aquino just asked LP members to begin the push for Roxas, the presumptive presidential standard-bearer of the party.

“The President has given the party the go-signal to back up … to the extent we all can, to support his (Roxas’) candidacy,” said Abad, an LP stalwart who served as the party’s campaign manager in 2010.

Roxas has not declared his candidacy for President, but he is going around the country—doing his job as interior secretary, according to Abad—obviously to make himself visible, as what Vice President Jejomar Binay, his potential rival in the race for Malacañang, has been doing.

Abad’s remarks came as response to questions about what the LP was doing to improve Roxas’ standing among prospective presidential candidates.

Roxas is doing poorly in the polls, placing third behind Sen. Grace Poe, who topped the 2013 senatorial election, and Binay, the longtime front-runner who is considered the candidate to beat next year.

Senate President Franklin Drilon, also an LP stalwart, said Roxas might not be doing well in the polls but he could beat Binay.

Speaking in a television interview on Monday, Drilon said Roxas just had to present himself to the people as the better and most qualified presidential candidate.

“He could be low in the surveys, but your ability to explain and to put across a message is something that you must take into heart,” Drilon said.

Binay, speaking in an interview on Radyo Inquirer dzIQ, shrugged off Drilon’s statement.

“It’s not bad to believe so that’s OK. As for us, our belief is based on the surveys and the surveys show that we are leading,” he said.

Drilon said Roxas remained the LP’s “putative candidate,” as no other party member had shown interest in winning the presidential nomination.

Roxas may not have declared his candidacy but he is “engaged in presenting himself” to the people, he said.

Drilon acknowledged that popularity was important to a candidate but said that was “not the only consideration.” A candidate’s track record is more important, he said.

Abad, speaking to reporters in the House of Representatives, said the situation remained “fluid.”

“You cannot make those absolute statements now,” he said when asked if Roxas was the LP candidate.

“Many things happen. But of course, given the choice, the LP would like to see Mar as its candidate,” he said.

Abad said he could not say whether Sen. Francis “Chiz” Escudero would be ruled out of the party’s ticket in spite of the reported misgivings of LP members about the senator, on whom they blame Roxas’ defeat in the 2010 vice presidential election.

Despite being a supporter of Aquino, Escudero, who had strong voter support, dumped his running mate Roxas and endorsed Binay.

Escudero rejected that idea on Sunday, saying the winners won because they worked hard and the losers lost because of their shortcomings.

He also said he did not understand why LP members were talking about not including him in their plans for 2016 when he was not a member of the party, whose doors, he acknowledged, were closed to him.

Abad said, however, that the LP had always been engaged in coalition politics, and 2016 would be like 2010, during which the party teamed up with other parties to strengthen Aquino’s run for the presidency and later control Congress.

“It’s not only political parties that will determine what will happen in 2016,” he said.

Speaking to House reporters separately, Escudero said he and Senator Poe would take their time to decide whether to run for President and Vice President, as well as whether to do it as a team or individually.

“We have no alliance. What we have is a friendship. Perhaps it’s not appropriate to call that an alliance as we are not political parties. We’re just people who talk and have things we agree on. But we have no agreement” to run, he said.

Escudero said he and Poe did not enjoy the advantages of Binay and Roxas.

“Money, parties and groups—we do not have that. So I think it’s just right that Senator Poe, or I, or both of us, take more time to arrive at a decision whether to run in 2016,” he said.

The priority, Escudero said, is Poe’s decision “because like I’ve said, how I served [her father, the late movie actor Fernando Poe Jr. as spokesperson in his losing presidential bid in 2004] is the same thing I can offer her.”

Escudero, who quit the Nationalist People’s Coalition in late 2009, said he would rather run as an independent if he would run for higher office.

He said he believed Poe, if she decided to run, would make a great President. Asked why he thought so, he demurred, saying it was not yet campaign season.

In his television interview, Drilon was asked if Poe had a chance of being chosen by President Aquino. He said he did not want to comment until “we get to the bridge.”

Poe has not even said whether she is running for higher office, he said.

Drilon said the President’s endorsement would be “critical” and the LP would follow Aquino’s lead.

Asked about reports that LP members are not including Escudero in their plans, Drilon said he had always been saying that he preferred party members for candidates.

“[W]hen you sign your certificate of candidacy, you should have [the] nomination of the party to which you belong, and I would prefer a member of the party [as] our candidate,” he said.