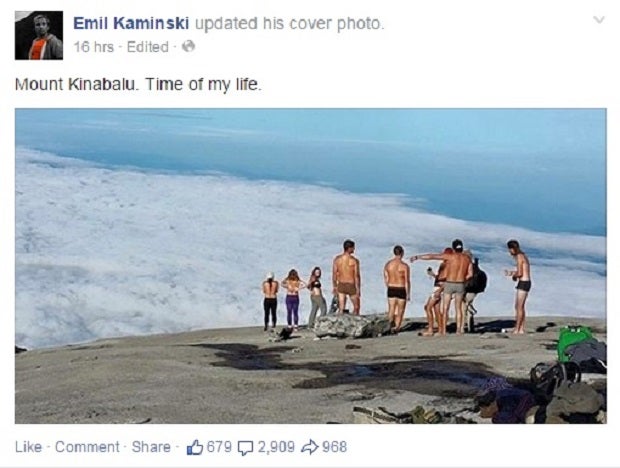 PETALING JAYA — A Canadian national claiming to be one of the nudists that posed for photographs on Mount Kinabalu, calls the experience the “time of my life” and is brushing off Kadazan Dusun legend as “superstition.”

“It is not based in logic, but superstition. I utterly do not care for superstition,” said travel blog Monkeetime founder Emil Kaminski on his Facebook page.

“If local religion prohibits certain actions, then local believers of that religion should not engage in it, but they cannot expect everyone to obey their archaic and idiotic rules,” he said.

When advised to show respect to the local culture by a commenter on Facebook, Kaminski replied by saying “f**k your culture.”

Kaminski, on Monkeetime’s Twitter page, called Sabah Tourism, Culture and Environment Minister Datuk Masidi Manjun an “idiot” and “not a minister of tourism.”

“Oh, Malaysia, why are your politicians so stupid,” Kaminski wrote on Facebook.

“Some deranged prick has linked earthquakes and mountaintop nudity.

“Well, apparently I am responsible for the 2015 Nepal quake, and whatever incoming quakes in Canada (as well as Thailand, India, China, Taiwan, Hongkong, and a variety of other countries…),” he said, while posting a picture of him exposing his naked behind at various other mountain tops.

He also poked fun at making reparations for exposing himself on top of Mount Kinabalu.

Kaminski also wrote that he believes in having some “decency laws” but didn’t see the harm in nude photos being taken on a “remote mountaintop.”

He adds that he takes his “butt photos” in remote places where hardly anyone sees him.

On Twitter, Kaminski describes his blog Monkeetime as a platform that provides travel videos.

Monkeetime’s YouTube page was founded on March 2007, and has over 10,000 subscribers and over five million views.