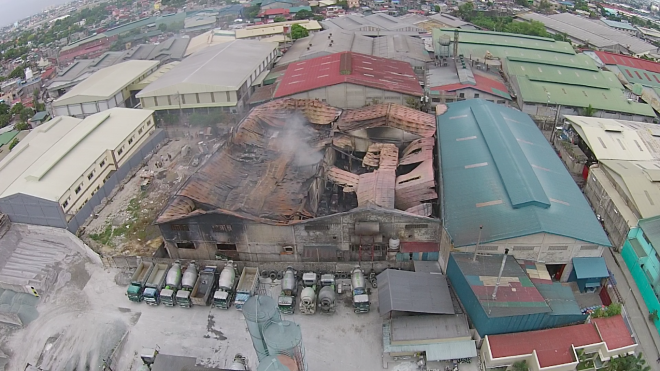 Aerial shot of the Kentex Factory in Valenzuela City, two days after it was gutted by fire on May 13. Screengrab of video by Rem Zamora/INQUIRER FILE

Survivors of the Kentex fire and their families on Monday asked the Office of the Ombudsman to investigate the Department of the Interior and Local Government (DILG) and Department of Labor and Employment (DOLE) for possible liability over the seven-hour fire at the slippers factory in Valenzuela that killed 72 people.

The filed complaint attached with affidavits of survivors and their families may complement the ongoing fact-finding investigation by the Ombudsman probers over the inferno that elevated the issue of sweatshop working conditions in the country.

The complainants asked Ombudsman Conchita Carpio Morales to probe the officials and file charges of reckless imprudence resulting in homicide and physical injury and negligence of duty.

DOLE and DILG are being accused of failing to ensure safe work conditions for the workers of Kentex Manufacturing Corp., while the BFP is being sued for its delay in releasing the report on Kentex’ failure to comply with safety standards, said Remigio Saladero Jr., the victims’ lawyer.

Saladero said the complaint did not include Valenzuela City Mayor Rex Gatchalian and other local government officials because some of the victims’ families took note of their kindness toward them.

President Benigno Aquino III earlier pinned the blame on the local government of Valenzuela for granting a business permit and certificate of occupancy to Kentex despite its noncompliance of safety standards and apparent violations of the Fire Code.

Saladero said the criminal and administrative complaint included sworn affidavits of 49 survivors and their families.

Saladero said the families are also set to file charges of estafa and reckless imprudence resulting in homicide and physical injury against the Kentex officials before the Valenzuela city prosecutors’ office on Friday.

In the letter complaint, the complainants painted the dire sweatshop picture of the company to Ombudsman Morales – steel grills and matting for windows, no fire exits, smoke and fire alarms inside the factor, and lack of proper ventilation.

“We are writing to you… because we believe you alone can assist us in the dire situation we are in… We have no other choice but to seek assistance of your good office so that we can obtain the justice that we seek,” the letter read.

In an interview, Kentex driver Danny Atacador said the filing of the complaint was their way of seeking justice for his friends and family who died in the fire.

Danny’s wife Violeta was one of those who burned to death in the Kentex inferno. He said he was out on delivery at the time of the fire.

Atacador lamented that the company’s windows had steel grills and matting as if they were prison cells.

Of the 72 people killed, 69 died of fourth degree burns while three succumbed to inhalation of fumes. The seven-hour fire even killed a son of one of the owners.

President Aquino has vowed that charges would be filed against those responsible as the Department of Justice is investigating the incident in preparation for a preliminary investigation.

Read Next
Senate president: No to ‘opt-in’ provision of BBL
EDITORS' PICK
Tips for a cheerful life
Connect to PH’s fastest network with new Signature Plan Lite at only P599 per month
Petecio ‘blessed’ as Olympic gold quest continues
Philippines to bring home multiple Olympic medals for first time since 1932
Harnessing technology for quality education
Nesthy Petecio assured of Olympics bronze, ousts Colombian foe
MOST READ
Nesthy Petecio assured of Olympics bronze, ousts Colombian foe
Isko for 2022? Manila mayor takes a swipe at Duterte on live broadcast
Why is Taiwan not called Taiwan at the Olympics?
Lacson bares talks with Robredo ahead of 2022 polls
Don't miss out on the latest news and information.