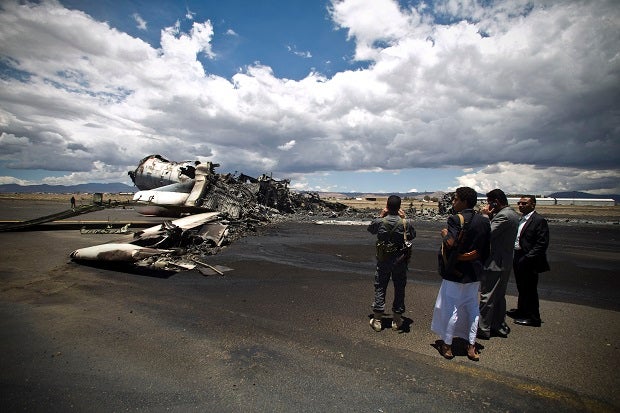 In this Tuesday, May 5, 2015 file photo, airport officials look at the wreckage of a military transport aircraft destroyed by Saudi-led airstrikes, at the Sanaa International airport, in Yemen. A Saudi-led coalition continues to bomb Shiite rebels also known as Houthis and allied forces across the country. The airstrikes campaign, which began on March 26, and the ground fighting have killed hundreds and displaced at least 300,000 Yemenis. AP

SANAA, Yemen – Yemeni rebels flexed their muscles Saturday by firing a Scud missile at Saudi Arabia just days before they are to sit down with the exiled, Saudi-backed regime for peace talks in Switzerland.

Saudi Arabia said it intercepted the missile fired at its territory by the Iran-backed Shiite Huthi rebels in neighboring Yemen.

“The Royal Saudi Air Defense Forces intercepted it with two Patriot missiles,” said the Saudi-led coalition, which has been waging an air war against the rebels since March 26.

Coalition aircraft destroyed the launcher used in the 2:45 am (2345 GMT Friday) attack on the southwestern city of Khamis Mushait, said the statement carried by the official Saudi Press Agency (SPA).

The missile was fired from south of the Houthi rebel bastion of Saada in Yemen’s northern mountains, it added.

There has been cross-border artillery and rocket fire into Saudi Arabia but virtually no missile attacks since the air war began.

The coalition has made destroying the missile capabilities of the Houthis and their allies a top priority of its bombing campaign.

But its spokesman Ahmed al-Assiri told Al-Arabiya television the rebels hid in caves some of the 300 missiles they were thought to have had prior to the campaign.

Saudi forces had “thwarted more than 300 rebel attempts to cross the border,” he added, calling it an act of “desperation”.

The bombing campaign was launched in support of Yemeni President Abedrabbo Manour Hadi, who fled to Riyadh as the Houthis advanced on his southern stronghold of Aden.

The coalition’s latest raids targeted rebel military sites and positions in northern, central and southern Yemen, including Sanaa where weapons storage depots were struck on hills overlooking the capital.

On Saturday they carried out strikes in Amran, Hajjah, and Saada as well as Lahj, where the rebel-held air base of Al-Anad was bombed.

The Houthis overran Sanaa in September, before going on to seize much of the country.

The interception of the Scud came after forces loyal to Saleh attacked several locations on the Saudi border Friday.

The coalition Saturday reported the second major ground attack of the war against Saudi territory.

“The Saudi armed forces today were able to repel an attack from the Yemeni side targeting several locations in Jazan and Najran,” said a coalition statement carried by SPA, referring to two Saudi border districts.

The attack, supported by Houthis, was coordinated by elements of the Republican Guard loyal to Saleh and sparked an hours-long battle in which four Saudis lost their lives, the coalition said, adding that “dozens from the enemy were killed”.

In Taez, seven civilians were killed when the Shiite militia fired on a residential area, while clashes in Dhaleh killed 12 rebels, officials said.

Fighting overnight on the northern and western entrances to Aden left dead seven people, including four civilians, and wounded 71, they said.

Tensions have escalated between Riyadh and regional rival Iran because of the months-long fighting in Yemen, while rights groups have expressed concerns about the extent of civilian casualties.

The violence comes only hours after the Houthis confirmed they would attend talks in Geneva aimed at ending weeks of war that has cost more than 2,000 lives.

The United Nations on Saturday confirmed the peace talks would begin in Geneva on June 14.

UN chief Ban Ki-moon reiterated “his urgent call on all Yemeni parties to engage in these consultations in good faith and without pre-conditions in the interest of all Yemeni people,” said a statement from his spokesman.

The meeting would be the first significant effort to stop the fighting, which has led to what the United Nations called a catastrophic humanitarian situation.

Yemen’s government exiled in Riyadh also said it would attend.

In line with UN Security Council Resolution 2216, Hadi’s government had refused to attend unless the rebels pulled back from at least some of the territory they have seized.