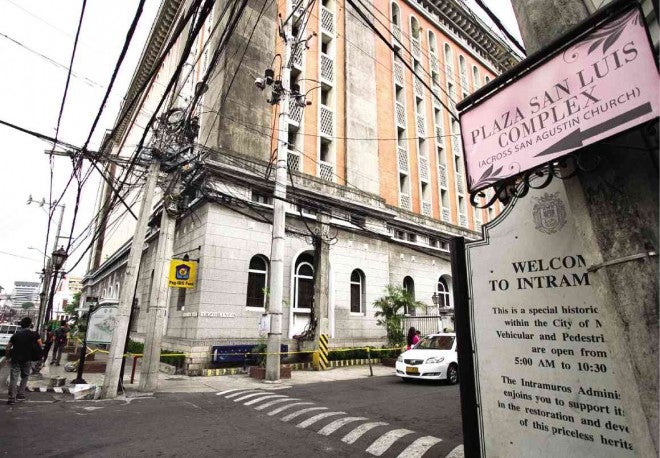 NO PLACE IN HISTORY Power and phone lines clutter and spoil the view of the historic Walled City within Manila. ALEXIS CORPUZ

The preserved Spanish-era enclave in Manila may finally get rid of those scene spoilers.

The agency tasked with the management of Intramuros is green-lighting a P120-million project to clear the area of overhead power and communication lines, usual turnoffs for tourists who want to take postcard-perfect photos or walk through historic sites free of modern-day eyesores.

Intramuros Administration (IA) chief Marco Antonio Luisito Sardillo III said his office is hewing close to the “first development plan” for the Walled City that was drawn up in 1973. The plan, which was endorsed by the Spanish government, recommended that cables be kept underground.

In an Inquirer interview on Friday, Sardillo said underground cabling works could begin in September, starting on the kilometer-long Aduana Street and later on General

The 1973 plan, he said, stressed the “reconstruction and recreation of the atmosphere of Intramuros. And that to prime it for redevelopment, all the facilities [related to] utilities should be underground.”

Unfortunately, over the last 42 years, this recommendation remained as mere words on paper. Lack of resources or other projects “deemed to be of higher priority” kept it in the backburner, he said.

But with funding now assured, Sardillo wrote to the Energy Regulatory Commission (ERC) on Wednesday to seek guidance or technical assistance.

“Our best-case scenario is that there will be a resolution, memorandum or order from the ERC that will guide future developments in Intramuros. When we make this happen—and it will happen—we’re counting on ERC and other institutional partners to shepherd and safeguard this project and see it through the coming years,” said Sardillo, whose term as IA administrator ends in June 2016.

IA is an attached agency of the Department of Tourism (DOT). The P120-million budget for the project will be drawn from the Tourism Infrastructure and Enterprise Zone Authority (formerly Philippine Tourism Authority, another DOT-attached agency), as approved in mid-2014, he said.

According to the official, no less than Manuel V. Pangilinan—chair of Manila Electric Co. and Philippine Long Distance Telephone Co.—has expressed his support and assured IA that the underground cabling project will push through.

The beautification project should also result in more pedestrian-friendly sidewalks—and more satisfied tourists— with the removal of electrical or telephone posts. On some streets, trees can replace those towering poles.

Among the longtime problems in Intramuros are the irregular sidewalks, but the public can now reclaim those spaces, he said.

IA recently started implementing a traffic scheme designed not only to give the streets back to pedestrians but also reduce “ground vibrations” caused by vehicles. Again, this measure was based on an old material—a study done in 1991—showing that vibrations undermine the structural integrity of the old buildings and walls in Intramuros. With Kathrina Pineda