Asean members can influence, not compel one another–Singapore PM 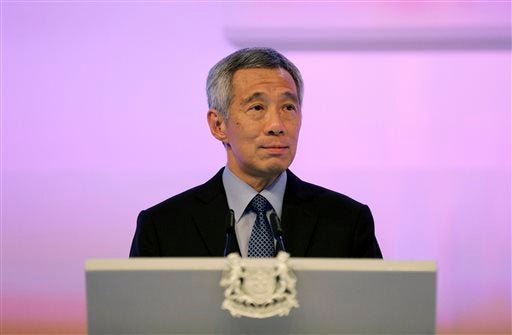 Asean countries can work together, influence one another, and even encourage others to tackle serious problems, Singapore Prime Minister Lee Hsien Loong said.

But the group cannot solve all problems and compel any member to act in a certain way, he told 17 visiting journalists from the nine other Asean states on Thursday, when asked about the issue of Rohingya refugees.

Lee also told them that ongoing economic integration was helping to promote development across Southeast Asia.

But on some issues like the humanitarian crisis, he said: “Asean is not one country, and it’s not possible for Asean to say, you do that, and you put a stop to this.”

Countries have to tackle these problems themselves, he said in response to a Myanmar journalist who asked him to comment on foreign media criticism of the grouping as “toothless” on the refugees.

Thousands fleeing persecution and deprivation in Myanmar and Bangladesh were stranded in the Strait of Malacca last month, until Malaysia and Indonesia agreed to accept them temporarily. Human trafficking camps and mass graves have also been discovered in Malaysia and Thailand.

In his most detailed remarks yet on the issue, Lee expressed sympathy for the plight of the Rohingya—a term he noted Myanmar does not use—whose problems are complex.

“The living conditions for the people must be pretty severe, otherwise they would not be going to sea and putting themselves at such danger of life and limb, with their children and womenfolk, and at the mercy of the traffickers,” he said.

Earlier in the session, held on Thursday, a journalist from Malaysia’s New Straits Times also asked him about the refugee issue. Lee said the problem had to be dealt with “upstream, in the source countries.”

But human traffickers, “entrenched, well-organized groups with an interest in keeping the flow going to extort money,” also had to be dealt with, he added.

Explaining the reluctance of some Asean countries to accept the boatloads of refugees—a stance criticized by Western nations—Lee said: “No country can take an endless number of refugees and say, ‘Well, we just take them on humanitarian grounds.’ Your own people will not accept it, it’s not possible.

“And when they do come, there has to be some way these people can be dealt with—either they go back to where they came from or they have to go somewhere which can accept them.”

Lee noted that Asean would declare an Asean Community at the yearend, but this would not be the end of regional integration, as the gap in development between older and newer members could be further narrowed.

There is also more work for the grouping in areas like the South China Sea, where Asean is in the process of negotiating a Code of Conduct with China to better manage disputes in the waters where four Asean nations are claiming territories that China has also laid claim to.

Lee said there was a common Asean view on the matter, but in terms of nuance, different countries had different positions.

Singapore’s position is that it is in no position to judge the merits of the various claims; it desires only to see the disputes managed peacefully and in accordance with international law.

He was also asked about Timor Leste’s membership of Asean. Lee said the grouping was carefully studying its application, and doing “quite a lot” to help Timor Leste get ready to join Asean.

“They are participating in some of the Asean activities in order to understand them, and Asean is helping them develop their capabilities in a wide range of ways,” he added.